Building a Bridge Between Membranes - BioTechniques

Building a bridge between membranes

A new tool opens up possibilities for real-time monitoring and control of intracellular membrane lipids. 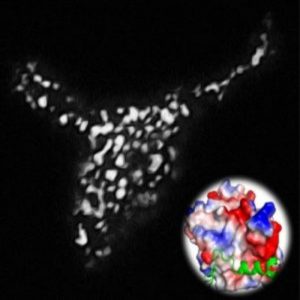 There are many well-established techniques for in vivo manipulation of proteins in a cell, but what about lipids? Current methods to manipulate lipids are often non-specific and are not sufficient for analysis of active lipid metabolism, membrane contact sites, or changes in membrane composition at the single cell level. Now, Yubin Zhou, Yun Huang, and their colleagues at Texas A&M University present an optogenetic toolkit in Chemical Science that couples photoactivatable protein tags to lipid-binding protein motifs.

“One area of optogenetics that is lacking is the direct targeting of membrane lipids to active areas and the contact region between intracellular organelles,” said Zhou. “You can target membrane-binding motifs using chemical tools, but they do not have the specificity and spatial precision.”

The team built on earlier work where fluorescent proteins were fused to the phosphoinositide (PI)-binding pleckstrin homology (PH) domain to label membranes. This approach competed with endogenous PI-binding proteins and disrupted cell-signaling pathways. So Zhou’s team fused the smaller polybasic (PB) PI-binding domains that occur in small GTPases and recognize specific phospholipids with the light, oxygen, and voltage-sensing domain, (LOV2 domain) from an oat-derived phototropin protein. Following blue light illumination, the LOV2 domain of OptoPB undergoes a conformational change that exposes the PI binding region of the PB domain, allowing it to bind to membranes.

The new system, which the researchers call OptoPB, can express a range of modular photoactivatable domains and phospholipid domains for different excitation wavelengths and membrane-binding capabilities.

“Technically, it required a lot of trial and error to find a switch for a chimeric protein that will respond to light,” Zhou said. “Conceptually, the membrane contact site between the endoplasmic reticulum (ER) and plasma membrane is very elusive, so trying to target this region was difficult, since so little is known about it.”

Despite these challenges, the group succeeded in observing photoactivatable translocation to the ER-plasma membrane contact sites. They also found that they could directly manipulate the membrane contact region itself. By including defined alpha-helical spacers in the OptoPB fusion proteins on the ER membrane, the authors were able to tune the gap distance between membranes and also physically block the movement of a protein on the plasma membrane upon illumination.

Looking ahead, Zhou and Huang see many potential applications for OptoPB in cell biology and beyond. “So far, we are building one bridge between the ER and the plasma membrane, and we would like to build bridges between other organelles,” Zhou said.