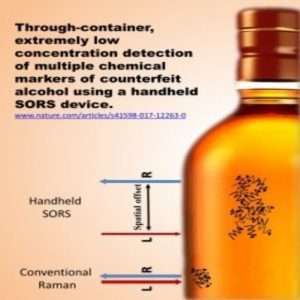 An estimated 10% of food and drink is fraudulent. This food fraud has serious health, economic, and social implications, and can also be hazardous to human health. For example, spirit beverages are a huge European export that supports over 1 million jobs and generates significant trade revenue. Counterfeiting threatens the spirits market and poses dangers for human consumption if harmful substances are introduced.

The challenge for scientists trying to prevent fraud and protect brand reputation is to identify fakes quickly in situ, while products are still in their packaging. In September, chemists at the University of Manchester reported a significant breakthrough in counterfeit food and drink detection, which they published in Scientific Reports.

“We assessed 10 additives in whisky, rum, gin, and vodka, and found that we could measure them inside the bottlecontainers without opening the bottle itself,” said senior study author Roy Goodacre.

“They’ve used some nice advances in Raman that allow through-container measurements, such that your measurement is no longer dominated by the container and you can get a clear image of what’s inside,” said Alison Nordon from the University of Strathclyde, who has collaborated with Goodacre in the past, but was not involved in this study. She explained that the SORS technique is a significant step forward for counterfeit food and drink detection, as it allows for discrete and rapid in-field testing. “It’s the fact you don’t have to open up [food containers] to do these measurements, because as soon as you start opening things up, you can’t sell them anymore,” she said.

The Scottish Whisky Research Institute provided spiked samples for blind testing, and the group successfully used their modified SORS device to detect all of the additives present. Moving on to more rigorous testing through brand bottles, the chemists detected methanol (a common alcoholic additive) at levels well below the maximum human tolerance threshold.

“The coupling of the measurements with advanced data analysis procedures allowed them to differentiate between subtle spectra differences,” said Nordon, who was particularly impressed by the use of SORS to detect additives from within colored bottles.

Goodacre plans to expand the testing of alcoholic beverages to develop a comprehensive database. “We have analyzed a lot of sample, but that is only a drop in the ocean of the spirits world,” said Goodacre. He envisions that in the not so distant future, the technology will be deployed throughout the supply chain and possibly even for personal use. “We believe that what we have developed is just the first example and that this SORS approach will have general utility for all sorts of food security applications.”