A combination of virtual reality and artificial tactile sensations has given amputees feeling in their prosthetics. 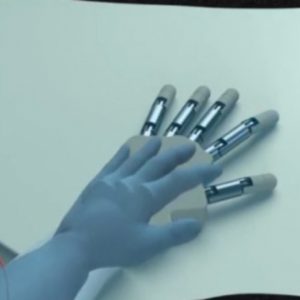 Scientists at Ecole polytechnique fédérale de Lausanne (Switzerland) have shown that amputees with prosthetics can be convinced of feeling in their lost limbs if tactile methods are used. The research, published in the Journal of Neurology, Neurosurgery & Psychiatry, has the potential to solve two major problems with currently available prosthetics; that they do not reflect the perceived size of lost limbs and they do not provide sensory feedback.

To trick the brain into embodying lost limbs the team used a combination of sight and touch to convince amputees that a prosthetic hand belongs to their body, as author Giulio Rognini explains:

"The brain regularly uses its senses to evaluate what belongs to the body and what is external to the body. We showed exactly how vision and touch can be combined to trick the amputee's brain into feeling what it sees, inducing embodiment of the prosthetic hand with an additional effect that the phantom limb grows into the prosthetic one. The setup is portable and could one day be turned into a therapy to help patients embody their prosthetic limb permanently."

The group’s study included two amputees who had lost hands. The team stimulated the tip of the index figure of the phantom hand by stimulating the nerve endings of the patient’s stump, generating an artificial tactile sensation. The patient also wore virtual reality goggles, which displayed the index finger of the prosthetic hand glowing as the stimulation was administered.

Both of the amputees said that they felt as though the prosthetic belonged to their body, and that their phantom limb had extended into the prosthetic. This sensation lasted up to 10 minutes after the experiment. This multisensory integration holds great potential for tailored therapy and treatment to provoke embodiment and to reduce telescoping of phantom limbs.