Scientists have created a soft robotic spider using a new process to manufacture these robots at the micro-scale. 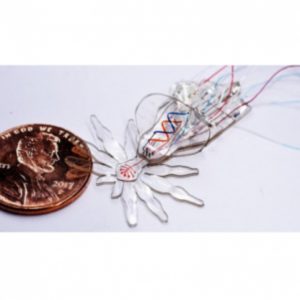 A new fabrication process enables the creation of soft robots at the millimeter scale with features on the micrometer scale, as shown here with the example of a small soft robotic peacock spider with moving body parts and colored eyes and abdomens. Credit: Wyss Institute at Harvard University.

Scientists hope that one day soft robots will be able to perform tasks that are impractical for their more rigid counterparts. They could be used in difficult environments, such as small cramped spaces, and during surgical procedures. Although small, centimeter-scale robots have been created, roboticists have yet to create multifunctional flexible robots that can function at a smaller scale.

A group of researchers at Harvard’s Wyss Institute for Biologically Inspired Engineering, Harvard John A. Paulson School of Engineering and Applied Sciences and Boston University (all MA, USA) has developed an integrated fabrication process to design and manufacture soft robots at a miniature scale. The study, published in Advanced Materials, demonstrates how they were able to produce a robotic soft spider inspired by the Australian peacock spider.

Co-author of the study, Sheila Russo, explains these limitations and how the team overcame them:

“The smallest soft robotic systems still tend to be very simple, with usually only one degree of freedom, which means that they can only actuate one particular change in shape or type of movement. By developing a new hybrid technology that merges three different fabrication techniques, we created a soft robotic spider made only of silicone rubber with 18 degrees of freedom, encompassing changes in structure, motion, and color, and with tiny features in the micrometer range.”

To create the soft spider the team used a soft lithography technique to generate a layered elastic silicone that constitutes the soft body. To create the robot’s shape and ability to move, the team integrated a network of hollow microfluidic channels into the different layers. They then used injection-induced self-folding to fill some of channels with a resin that hardens in specific places to generate shape. First author, Tommaso Ranzani, explains more:

“We can precisely control this origami-like folding process by varying the thickness and relative consistency of the silicone material adjacent to the channels across different layers or by laser-cutting at different distances from the channels. During pressurization, the channels then function as actuators that induce a permanent structural change.”

Wyss Institute Founding Director Donald Ingber is excited about the potential of the MORPH.

“The MORPH approach could open up the field of soft robotics to researchers who are more focused on medical applications where the smaller sizes and flexibility of these robots could enable an entirely new approach to endoscopy and microsurgery.”

Shining a light on swimming bacteria