A better source of stem cells?

Chemically reactivating a gene in human amniocytes can restore embryonic stem cell properties. Is it a compelling alternative to adult and embryonic models? 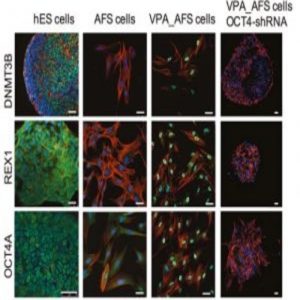 In 2012, Shinya Yamanaka, Director of the Center for iPS Cell Research and Application in Kyoto, Japan, received the Nobel Prize for reprogramming adult somatic cells into induced pluripotent stem cells (iPSCs). Although his landmark study ignited worldwide interest, researchers struggled to pinpoint an ideal protocol for investigating the epigenetic factors and biochemical targets that return cells to their naïve state.

“This alternative will allow us to create patient-specific cells that [can] be differentiated into any lineage without genetic modification,” said senior author Pascale Guillot at University College London. “These cells can be safely isolated from the fluid that surrounds the baby during prenatal diagnostics or at delivery.”

When injected into immunodeficient mice, these VPA-AFS cells formed well-differentiated teratomas. Despite demonstrating all three germ layers, “they remain transcriptionally different from ESCs,” explained Guillot. But, “as with all pluripotent cells, including ESCs, these are subsequently re-derived towards the lineage of interest before being infused into donors.”

For geneticist Colin Bishop at Wake Forest School of Medicine, who was not involved with the study, some questions remain unanswered. For example, “Do VPA-AFS cells actually differentiate into more cells types than the cells from which they were derived? The fact that they form teratomas in some ways makes them less desirable clinically than the parental AFS cells, which don’t.”

Future studies could further characterize AFS cells’ differentiation potential in vitro to demonstrate a clear benefit for use (3). According to Bishop, Guillot’s study has legitimized an alternative stem cell method, but its superiority remains unproven.