Caspases and Apoptosis: Not Killing Themselves - BioTechniques

Caspases and Apoptosis: How Cells Wield Deadly Weapons Without Killing Themselves

Caspases are best known for their essential role in cell death, but they also play important roles in living cells. How can caspases act inside a cell without accidentally killing it? 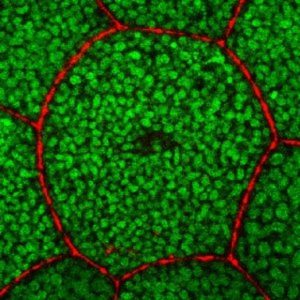 The Tango7 coactivator in the cell cortex.

Caspases throughout the cell activate each other in a chain reaction, like adding a match to a pool of fuel, leading to cell death. Recently, a genetic screen revealed that a newly identified gene, called Tango7, was involved in regulating apoptosis, but it wasn’t clear how that gene fit into the existing framework for caspase activation. Clearly, there was more to the story. “It still remained a mysterious gene to me because it was hard to see where it fit in. We thought our biochemical understanding of caspase activation was complete,” said cell biologist Hyung Don Ryoo from New York University, who was not involved with the story. “It’s in all the textbooks.”

Now, researchers at the University of Wisconsin have discovered that cells specifically control where the caspases are active by using caspase co-activators—such as Tango7— located in independent compartments in the cell, thus allowing for finer control of caspase activity than was previously believed.

To investigate how caspase activity is regulated, the team focused on Drosophila salivary glands. After caspases are activated, these glands stretch to fill with a sticky substance that larva use to glue themselves to a wall for metamorphosis. Approximately 12 hours after the glue is secreted, metamorphosis begins, and a second wave of caspase activation occurs, triggering cell death to allow massive remodeling of the body into adult structures.

“This is the first time that we have one experimental model where caspases are playing two different roles in a single tissue, just 12 hours apart,” said Arash Bashirullah, who led the study. “That allows us to really compare and contrast the two processes.” The question is, how do the same caspases first trigger cell stretching and then 12 hours later trigger cell death?

Using cell imaging, the researchers discovered that during salivary gland stretching, caspases in the cell cortex—a thin lining inside the cell membrane—are activated to destroy actin filaments, thus allowing the cells to stretch without tearing. The caspase activity is localized specifically to the cortex by Tango7 , a necessary co-activator. Twelve hours later, caspases are activated in the cytoplasm by a different co-activator called “dark,” triggering cell death.

“The most interesting observation is that this mysterious gene called Tango7 is a required activator of caspases, but it is acting at a different subcellular site, and its purpose is to remodel cellular morphology and actin dynamics during development,” Ryoo said.

That adds layers of complexity to the canonical mechanism of cell death that is described in the textbooks. “This result shows that you can activate caspases of the cortex, and even though there are caspases sitting around the cytoplasm, they won’t get activated unless they have the right co-activator present,” Bashirullah explained.