Molecular gradients have been established as a key driving force for cellular organization in the formation of early structures during embryonic development. 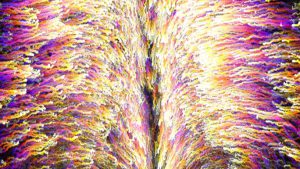 Tracks of endoderm cell movements from time-lapse experiments studying how cells are internalized to form the hindgut in a developing chick embryo; time is encoded in track color from 0 hours (purple) to 16 hours (white). Credit: Columbia Engineering (NY, USA).

A new live imaging technique has been developed by researchers, led by Nandan Nerurkar, from Columbia Engineering to study how genes and molecular mechanics influence the formation of structures in early embryonic development. The research team found that the formation of one embryonic structure, the hindgut, is enabled by the collective migration of endoderm cells, following a molecular gradient converted into a force gradient, from the surface of the embryo and into the center.

Understanding cell differentiation has long been a primary focus in embryology but Nerurkar emphasizes the importance of exploring all aspects of our development.

“It is equally important to understand how to instruct those cells to organize into functional three-dimensional organs. The developing embryo holds the recipe for this, and many research groups, including ours, are now leveraging the language of physics and mechanics to dissect it.”

The results demonstrated that cells were responding to a molecule known as fibroblast growth factor (FGF) that forms a molecular gradient from low, in the extremities of the embryo, to high, in the center. As the embryonic cells sense the FGF they contract, in proportion to the FGF concentration present, pulling passive endoderm cells in towards them that then work their way up the gradient, contracting and recruiting further cells towards the elongating hindgut.

These findings aid in providing a better understanding of the causes of birth defects, indicating that FGF dysfunction can lead to developmental issues and miscarriages, commonly in the first trimester when this process takes place. What’s more, the study could also bear implications for the development of functional organs from stem cells for use in regenerative medicine and organ transplants.

The next step for Nerurkar’s research is to apply the novel techniques developed in this study, to examine the formation of the mid and fore-gut. “I want to learn more about how mechanics and molecules are integrated to coordinate the formation of these very distinct tissues by disparate mechanisms, yet from the same initial pool of stem cells,” he commented.

“By focusing on the tissue-level mechanics downstream of FGF signaling, we may now be able to understand what this important pathway does to shape other organs and tissues during development, including the heart, brain, and spinal column.”

The genetics of parthenogenesis