Bits of DNA are powerful tracers that could point the finger at fracking companies contaminating wells, help oil workers figure out where to drill, or confirm the mine of origin for precious stones. Dig in… 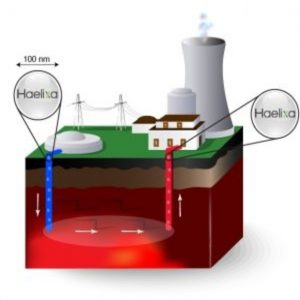 Imagine you’re at a jeweler’s, perusing rings. Is that emerald from a Colombian mine, as claimed? Or is it from somewhere else? Could it be lab-made?

What if you could find out using PCR?

In April, the startup technology company Haelixa in Zurich, Switzerland released a technology to tag precious stones with snippets of DNA. And gems aren’t the only target that cofounder and CEO Michela Puddu has in her sights. Incorporating minute levels of DNA-toting nanoparticles into a variety of products could label their origin, indicate when they were produced, and even distinguish originals from counterfeits. DNA tagging is also poised to become a tool in the energy industry, helping to track flow of oil underground, highlight the spread of fluid used in controversial hydraulic fracturing (“fracking”) for natural gas, or identify leaks in nuclear plants.

A New Kind of Fingerprint

Oil companies need to identify how the precious fluid flows underground and where the “sweetest spot” is in which to drill. Those flow patterns aren’t always predictable, and they can change over time. Currently, drillers can monitor flow by injecting dyes or radioactive tracers into wells and checking where those labels come out. But there’s concern over the toxicity of radiation, of course, and the available tracer options number in the dozens—limiting how many underground streams oil workers can distinguish. A lengthy horizontal well could easily require more tracers than that.

“The idea was to develop new tracers…that would provide a higher number of distinct fingerprints,” said Puddu. “DNA was a natural choice because basically you can design as many unique tracers as you want.” Plus, real time PCR can identify those tracer sequences in very low concentrations. Another advantage is that DNA is relatively inexpensive.

Haelixa synthesizes DNA tags less than 200-base-pairs long. Some are fully artificial sequences. Others are based on natural sequences (e.g., vegetable genomes)—though not from protein-coding genes. Some customers are more comfortable with the idea of natural sequences than wholly invented ones, said Puddu, although both are harmless.

The downside of DNA is its fragility, especially when exposed to light or chemicals. In fact, oil companies tried to use it as a tracer during the 1990s, but those attempts failed because the nucleic acids couldn’t survive the oil well environment.

Haelixa’s solution is to encase the strands in a 100-nm particle composed of silica or other oxides. Such nontoxic particles are already common in food additives and medications. It takes very little of these tracers—on the order of grams—to label underground fluids, Puddu said. “We work at parts per billion or parts per trillion.”

To read out the tags on the other end, Haelixa simply dissolves the capsule and performs RT-PCR. One challenge they’re currently working on is to identify easy-to-operate PCR machines so that end users, such as jewelers or oil workers, can check the results themselves.

There were more than 500,000 producing gas wells in the U.S. in 2015 and approximately 2000 operating oil rigs in 2012 according to the U.S. Energy Information Administration. With near-unlimited possibilities for unique DNA tags, geologists could inject different tracers into dozens of oil well sites, or even different tracers into the same spot at different times. Then, they can collect samples from the surface to determine what’s going on in an underground reservoir. Is the flow fast or slow? And where would production be the highest? “You can build a complex map of what’s down there,” said Puddu.

Similarly, quickly identifying a power plant leak makes it easier to plug, and many current tracers, unlike DNA, are unstable in nuclear plants. Of 65 commercial nuclear plants currently or recently in operation in the U.S., 46 have suffered sizeable tritium leaks according to the Nuclear Regulatory Commission. Finding leaks quickly with DNA would save the plant down-time and the community from stress and worry over nuclear materials in the environment.

Tracesa, like Haelixa, encapsulates its DNA tags in nanoparticles. The company uses a polymer coating, which protects the delicate nucleic acid from temperatures greater than 150°C, pressures of 1000 bar, and the mechanical stress of passing through equipment such as pumps.

BaseTrace, instead, has modified the DNA’s secondary structure to make it resistant to the extreme temperatures and pressures it would encounter in different applications and also includes stop codons so there’s no chance the DNA could be translated into an active protein. They’ve developed algorithms to customize the DNA’s stability to specific conditions, and their tracers have survived mixture with fracking chemicals as well as weeks under ultraviolet light.

One application for BaseTrace’s technology would be to identify environmental hazards caused by fracking, which involves high-pressure injection of liquids into rocks to break open fissures and release oil or gas. At least 137,000 sites in the US have been fracked or have received fracking permits since 2005, according to a 2016 report by Environment America. That work required at least 5 billion pounds of hydrochloric acid, 1.2 billion pounds of petroleum distillates, and 445 million pounds of methanol, although the exact ingredients of fracking fluid are a guarded secret. Those three ingredients alone have been linked to birth defects, nausea, and cancer. The process has become highly controversial as communities worry that the injected chemicals might reach their drinking water.

Current tracers tend to get too diluted, or are radioactive—another thing that isn’t appealing to local residents. If the frackers were to label their injections with a smidge of DNA, testing the water for those sequences would give the communities a clearer picture of what’s getting through and how much. The process could lay blame—but it could also absolve companies that aren’t liable for contamination.

Haelixa uses its nanoparticles to take the tech a step further, offering not only a way to identify sample origins, but also to monitor the conditions under which different particles meet. That might include differences in pH, temperature, light intensity, or oxidant concentration. For example, product manufacturers or purchasers might want to check that their inks or cosmetics were stored appropriately. Or energy companies might want to better understand the temperature situation beneath their feet, where it’s difficult to collect such data beyond their boreholes.

To do this, Puddu said, the company makes nanoparticles with multiple compartments. One compartment contains the identifier DNA. The other compartments contain DNAs engineered to be sensitive to certain conditions. For example, adding light-sensitive caging groups to the molecule make it prone to degrade when illuminated. “This sequence would be damaged in a very specific way,” explained Puddu. When the users get the particles back, they can test how damaged the sensitive sequences were and thus determine what kind of conditions they underwent.

In February, Haelixa began tests of their technology in a U.S. oilfield.