Researchers engineered light-sensitive E. coli to paint a colorful picture. This technology may enable gene control of different metabolic pathways in bacteria in the future. 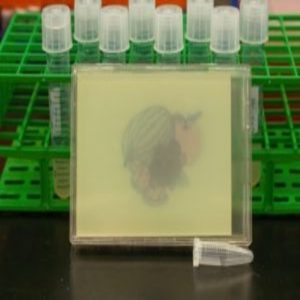 Christopher Voigt and his team from Massachusetts Institute of Technology are challenging the notion that paintings belong in art exhibitions by using bacteria to create art in the lab. They engineered E. coli so that they can be triggered by colored light to literally paint a colorful picture. Their findings, reported in Nature Chemical Biology, demonstrate an advanced system in synthetic biology that can be used for controlling metabolic pathways in the future [1].

“The reason that we want to control genes with light is so that we can turn them on and off very quickly,” said Voigt. He and his team engineered the colored light-sensitive system by introducing complex genetic circuitry into the bacteria. These circuits encode light-sensitive proteins that respond specifically to red, green, or blue (RGB) light. They next projected an RGB colored image from the top of an incubator onto agar-plates coated with a carpet of bacteria. The activated light-sensing proteins triggered a cascade reaction, resulting in over-expression of enzymes that reacted with substrates in the agar plate to produce pigments of corresponding colors. This mechanism enabled the bacteria to paint what they saw.

In 2005, Voigt and his team genetically modified E. coli to produce a black pigment on stimulation with red light, creating a black-and-white image [2]. But the limited technology back then allowed manipulation of only one gene at a time. For their new paper, Voigt and his team used the sophisticated genetic tools available today to achieve multiple-gene control in the RGB light–sensitive E. coli. “Different colors of light give you a remarkable ability to—almost like a Marionette puppet—control what’s going on inside of the cell by flashing different colors or combinations of colors [of light],” said Voigt. He believes that this new system is more suitable for manipulating biological processes, which involve the interplay of multiple genes.

“It is technology that is new and super, and [it is] clear what it is useful for,” remarked John Christopher Anderson from the University of California, Berkeley who was not involved in this work. Voigt explained the bigger goal behind this bacterial color-painting technology: “What we want to be able to do is control three different genes independently using different colors [of light], including combinations of colors,” he said. His team demonstrated this possibility by light-based control of three different metabolic pathways involved in acetate production in E. coli. In the future, Voigt envisions these “disco bacteria” inside industrial fermenters, dancing to the tunes of flashing lights that will control production of metabolites through a feedback mechanism.