What Are Beta Blockers Used For And Could They Treat Cancer?

In principle, taking a well-established drug and repurposing it to treat another condition is a great way to swiftly and cheaply treat new patient groups. However in reality, it’s a tricky business getting hold of the data to realize those tantalizing benefits. What are Beta Blockers used for and could they treat cancer? 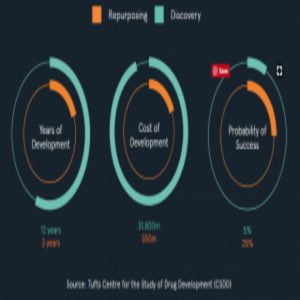 Diagram from the Healx website, using data from the Tufts Center for the Study of Drug Development (CSDD).

The results are in, and John Heymach, a clinician at the University of Texas Anderson Cancer Center, is excited to find that beta blockers may prevent lung cancer resistance to treatment. Beta blockers have been used for decades to treat high blood pressure, whereas most cancer treatments are drugs developed specifically to inhibit molecules that promote tumor growth. 50-80% of non-small cell lung cancer (NSCLC) patients develop resistance to the classical treatment plans, and in a recent retrospective clinical trial, Heymach’s team found that some of this resistance is mediated through beta-adrenergic receptor signaling, which beta-blockers suppress (1).

This isn’t the first time that beta-blockers have connected with the fight against cancer. In 1989, Hildegaard Schuller’s group at the University of Tennessee showed that beta-adrenergic receptor signaling is important in drug-resistant lung tumors (2). “I am happy to see that people who have clinical connections are picking up on findings like that,” said Schuller.

But why has it taken nearly three decades for these implications to be pursued in a retrospective clinical trial?

“One of the major obstacles is getting clinical data together to let us investigate whether those patients on beta blockers really receive a lot of benefit. Many clinical studies don’t collect all the data on what drugs [including beta blockers] patients were receiving or don’t make it available,” said Heymach.

A lack of transparency and data sharing in both clinical and non-clinical science underlies the reproducibility crisis. “I’d hate to repeat an expensive study that may take years and years to do if there is useful data just sitting in somebody’s database somewhere,” said Heymach.

Sharing is parenting 101, and you might think that sharing data in the world of science should be just as straightforward. However, “The entire system we have set up rewards everyone for keeping things silent and private, and the net effect of that is really negative from a public good perspective,” said John Wilbanks from Sage Bionetworks, a non-profit research organization that promotes open science and seeks to find appropriate methods to enable a more open and collaborative research process.

Data sharing can’t just happen at the drop of a hat; planning is required to create legal structures that safeguards patient privacy and commercial interests. One potential solution is organizational structures similar to land-trusts, where participants register and sign a confidentiality contract.

Technology to support data sharing on a larger scale is now available. “These [computational] changes have happened relatively rapidly, and that hasn’t filtered into the sciences yet,” said Wilbanks. Similar to the uptake of any new technology, data sharing platforms need to prove worthwhile and easy to use before they’ll move into standard practice.

But reports of successful data sharing schemes are creeping into the news. For instance, the pharmaceutical giant GlaxoSmithKline (GSK) released the details of approximately 10,000 bioactive compounds against malaria with their open-source malaria project. The company included early stage drugs that had not yet been tested in clinical trials.

Clinical trials are a considerable expense, so some companies fear losing their initial investment if details of drugs are released into the public domain before the company brings them to market. A new program at the National Institutes of Health, the National Center for Advancing Translational Sciences (NCATS), now provides a legal framework that enables companies to protect their interests while sharing drug details.

“The idea behind the program was really to see if we could figure out a way that we could take advantage of the investigational drugs and biologics that pharma companies had been developing, but discontinued for business reasons, or because the drugs failed to show efficacy for the indication that they were developing it,” said Christine Colvis, the director of NCATS.

NCATS relies on a crowd-sourcing strategy that requires pharma to make an initial leap of faith in sharing their drugs, just as GSK shared biological details in their malaria project. The drugs shared in this program are even more valuable since they have proven safe in humans in a phase I clinical trial. When academics reviewing the files suggest new indications for testing the drug, NCATS draws up a contract establishing a partnership between the pharmaceutical company and the academic institution.

The novelty of this program lies in opening up potential drugs to the broader scientific community, and in the “template agreement” contract. The agreement protects the company’s intellectual property (IP) as well as the academics’ new indication IP, and so enables the sharing of propriety data.

Once an agreement has been reached, NCATS funds phase II trials to test the drug’s efficacy for the new disease. If this crowd-sourcing strategy works, Colvis hopes that it will be adopted and reproduced by other companies and funding bodies. “In that way it will have a greater effect than just the handful of projects that we are able to support,” said Colvis.

These new types of community-wide structures promise to advance treatments for patients, but they only offer advantages for drug formulas that have yet to be commercialized.

“There is no incentive for a company to invest in a phase III trial for something that is available as a generic because there is no way to recoup their investment,” said Colvis. “We are missing this opportunity potentially. There are therapeutics already out there on the market that nobody is doing the careful exploration and trial to evaluate efficacy in the third or fourth indication.”

“We’ve got something relatively inexpensive that could potentially help patients, but ironically, because the drugs are inexpensive, no company is going to make a lot of money. So it can be a challenge to get such studies funded,” said Heymach.

That said, in countries with a national health service, cheap drugs are financially beneficial. Non-profit organizations such as Findacure in the UK are beginning to use a social impact bond model where investors provide support for clinical trials. If the trial is successful, the investors will be repaid out of the savings in the National Health Service. Investments are used to support multiple trials in the hope that at least one will provide a return on investment.

Since this type of funding model relies on a national health service, it is not available in the US. Despite this, Heymach believes that he will find other ways to fund a beta-blocker clinical trial in NSCLC patients. “We hope that doing such studies in cooperative groups or with other sources of funding can be an alternative move,” said Heymach.