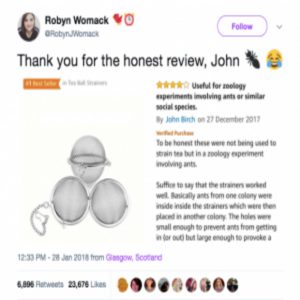 Not all science techniques require pipettes and thermocyclers. Some require a bit more creativity. At the end of January, the hashtag ReviewForScience took the world by storm, as scientists began posting twitter reviews about the usability of everyday products for science.

Scientists posted about everything from Ikea shopping bags for catching swans, to yoga mats for fish surgery, and even vibrators for drawing spiders out of their dens. The complete set of posts, which is very entertaining, can be found under #reviewforscience. But the viral trend actually started with a benign Amazon review of tea strainers from a non-scientist.

“I suppose I’m what Douglas Adams would call a techniquette. I have a lot of high-level interest in [science], even though I’ve never done it,” said John Birch, the author of the unorthodox Amazon review that inspired the hashtag. In the review, John confessed that he wasn’t using his strainers for tea. Instead his son, Graham Birch, a zoology graduate student at the University of Exeter, used them for transferring ants.

Graham is interested in the consequences of interactions between social groups. When he began his master’s degree program, he intended to study colony competition in termites by introducing a termite from one colony into the same wood source as termites from another colony. But like most things in science, things didn’t go as planned; the termites died before he could use them in the experiment. Left with limited options, Graham turned to ants that were already being used in the lab for other projects.

“It would be quite bad if I was killing off their study species during my experiments, so the tea strainers came in as a convenient way to protect the ants I was introducing into other colonies,” noted Graham.

Alas, the ants were not as aggressive as expected, so there was no need to protect the intruder and thus no need for the strainer. Now, Graham is simply introducing the intruder into a petri dish containing ants from differing colonies and looking for primed responses of colony competition.

“It seemed a perfectly reasonable use for a tea strainer,” remarked John, who reviewed the strainer in an honest, but witty way based on what Graham had told him. He has an ongoing competition with a colleague to see who can become the highest ranking Amazon Top Reviewer, so he has been reviewing everything that his family purchases.

The review sat quietly for a while, until one night when Robyn Womack, a Zoology PhD student at the University of Glasgow who studies how environmental factors affect circadian rhythms in birds, stumbled across it in her quest to avoid using tea bags. “Because I’m part of the zoology community I found it funny. I obviously didn’t expect that 24 thousand other people would also find it funny,” said Womack who took a screen shot and tweeted the review.

Overnight the tweet took off and caught the attention of Dani Rabaiotti, a Zoological Society of London PhD student. Rabaiotti, retweeted Womack’s post encouraging others to share their reviews under #reviewforscience and thousands responded.

Womack thinks it resonated with other scientists because it was relatable. “As scientists, we tend to focus on our own research and come up with these little creative solutions to our problems. We don’t realize that other people do the same. So I think as soon as one person posted I use this weird thing for my research, other people thought, ‘I do that as well!’ It was just really nice because it created a sense of community within science,” said Womack.

Graham will be graduating with his master’s degree in June and was appropriately too busy with his research to pay close attention to the stir that Womack’s tweet caused, but he was bewildered at how his father’s review garnered so much traction. Upon graduation, he’ll continue studying social interactions as a research assistant with the Kalahari Meerkat project.

“Anything I order will go through [my dad’s] amazon account, and then he just reviews everything to get his rank up. So, anything I order for my science in the future might get another quirky review from my dad that might blow up. Who knows?” joked Graham.

Indeed, when John shared that Graham wanted an egg poacher for his birthday, people replied asking why. “And I was saying, ‘to poach eggs!’” laughed John. “So any innocent thing he wants to buy now, people think, ‘what’s he going to do with this?”

John achieved his goal of becoming an Amazon Top Reviewer and is currently winning his competition. He enjoyed reading the responses to the hashtag. “I thought they were both hilarious and also inventive. I mean it’s just neat problem solving really. Once you get over the humor, it’s just clever use of materials that are all around.”

Non-scientists often read in the newspapers about the results of a study, but rarely ever get to hear about the actual scientific experiments. “[#ReviewForScience] gave people a look into scientific experiments as they were going on, a snapshot of people stuffing swans into shopping bags and other things,” said John. “I think it’s been a great way of educating people in how scientists work. It’s showing that science is not a bunch of people in white coats. They are out there getting their hands dirty, literally, in all sorts of strange ways.”