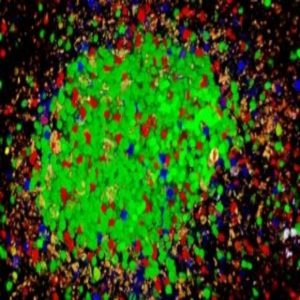 A self-reactive germinal center with auto reactive B cells (green) outcompetinge the other B cell clones.

Autoimmune diseases such as lupus result from rogue immune cells that attack the individual’s own body, causing inflammation and disease. Why and how this happens are longstanding questions in immunology that recently became tractable thanks to new transgenic mouse models. In the journal Cell, researchers now describe how immune cells start making self-antibodies and why immune cells in lupus patients change the types of self-antibodies they produce over time—a phenomenon known as “epitope spreading.”

Soren Degn, a postdoctoral fellow working with Michael Carroll at Harvard University, began this project by turning to two strains of mice, one with lupus and the other a “confetti” strain where healthy B cells were fluorescently labeled. He introduced bone marrow from these mice into an irradiated wild-type mouse and explored how normal B cells from the confetti strain responded to self-antigens on B cells from the lupus strain.

Normally, B cells binding to different antigens compete in germinal centers of the lymph nodes and spleen until the clones best-suited to fight the immune threat dominate.

The researchers collected the cells representing the dominant clones in the germinal centers of their bone marrow–transplanted mice and sequenced the heavy and light chains of the antibodies. When they tested the reactivity of these antibodies, they found that they were self-reactive.

“The importance of that is it tells us that self-reactive cells are just like cells that are responding to foreign antigens,” Carroll explained. “Prior to this paper, it was thought that if a self-reactive cell goes into a germinal center, the host prevents that cell from competing and dominating and making high affinity antibodies. What we found is just the opposite.”

Furthermore, self-reactive B cells triggered a change in the germinal center environment that promoted other B cells to respond to self-antigens in mice that received bone marrow from lupus and confetti mice.

MMR vaccine could protect against complications of COVID-19

The double trouble effect of stress

The hygiene hypothesis: how gut microbes arm us against autoimmunity

Cutting through the fog: understanding the causes of mental fatigue