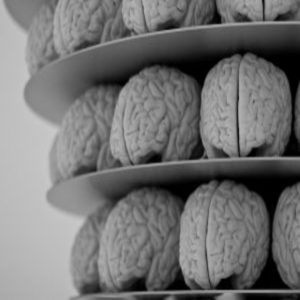 Is it all in your mind? Altered brain structures may influence the chances of IBS.
Credit: Neil Conway.

The English language holds a wealth of sayings connecting the digestive system and emotions. Have you ever trusted a gut instinct or experienced butterflies in your stomach? But this goes further than a simple play on words; research shows that the gut microbiome can affect neurotransmitters such as serotonin.

Not just emotions are modulated by these bacteria; researchers have theorized that a brain–gut axis also regulates the digestive disorder irritable bowel syndrome (IBS). Now, a study published in the journal Microbiome suggests that early childhood trauma may affect IBS through a brain–gut microbial interaction.

“A growing number of studies show that the gut microbiome plays a role in just about everything—from diabetes to obesity,” said lead author Emeran Mayer from the University of California, Los Angeles. “But the majority rely on mouse models. Our primary goal is to confirm human microbial abnormalities.”

Next, all subjects completed a psychological questionnaire. Those with IBS were more likely to exhibit anxiety or depression, but those with the IBS 1 microbiome reported significantly more emotional childhood trauma. Mayer speculates that significant traumatic life events can cause the microbiome to change because the brain and body go through rapid development early in life that influences gut microbiome assembly.

This influence may not be a one-way relationship. The researchers also studied the morphology of brain structures in all of their volunteers, finding that the IBS sufferers with IBS 1 microbiomes also had varying brain structures in areas associated with sensory processing. The authors suggest that metabolites generated by altered gut microbiota reach the brain and induce neuroplastic changes.

“This is our most important result, showing a correlation between gut microbial composition and brain architecture,” said Mayer. “However, we now have a chicken-versus-egg scenario as we don’t know the extent to which the gut and brain are controlling each other. We need to get to the bottom of this relationship.”

To do this, the team returned to the mouse model and are currently studying mechanistic routes by transplanting stool samples from humans undergoing cognitive behavioral therapy into germ-free mice.

“Going forward, our greatest challenge is to reproduce findings in human subjects,” stated Mayer. “The microbiome is incredibly complex, but we have found a clear relationship between microbial alterations, life events, and very distinct brain signatures.”

Maggots are on the case: new method speeds up forensic entomology