An infant with leukemia and an unrelenting infection held the key to a mutation that enables bacteria to develop antibiotic resistance. 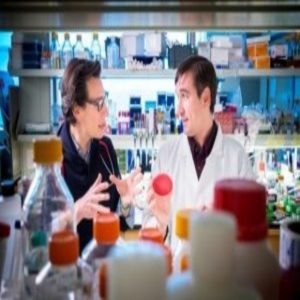 During treatment for leukemia, a 6-week-old girl developed a bacterial overgrowth resulting in a prolonged bloodstream infection. After the child had fully recovered, researchers at St. Jude Children’s Research Hospital investigated a bacterium found in her blood as it proved tolerant to a slew of typically effective antibiotics. As a result, the researchers discovered a genetic mutation that enabled the bacterium to develop antibiotic resistance, which they reported in the journal mBio.

“This was a ‘perfect storm’ because the patient’s status allowed the organism to acquire tolerance despite effective antibiotic therapy and despite [the bacterium] being in a niche which it hadn’t spent the last several million years evolving for,” said Joshua Wolf, co-corresponding author of the study.

The culprit bacterium, vancomycin-resistant Enterococcus faecium (VRE), was found in thin colonies of microorganisms developing on the infant’s central venous catheter. The VRE successfully infected the infant due to the lack of circulating white blood cells in her bone marrow caused by acute myeloid leukemia and chemotherapy. This presented a double-whammy of compromised immunity. As a result, the infant essentially had zero white blood cells to defend herself from invading bacteria.

The research team administered six different antibiotics, two of which are usually considered last lines of defense: daptomycin and linezolid.

“When treating patients with antibiotics, it’s always important to practice judicious use,” said Sameer Patel, Director of the Antimicrobial Stewardship Program at Ann & Robert H. Lurie Children’s Hospital in Chicago, who did not participate in this study. “The researchers at St. Jude went through antibiotics that normally clear VRE, but unfortunately, the bacterium overpowered the cocktail.”

The superbug persisted for 28 consecutive days until the girl’s immune system finally recovered.

To find out what made this bug so tolerant to antibiotics, the researchers at St. Jude sequenced DNA from 22 VRE isolates and discovered a single point mutation in the vancomycin-resistant E. faecium (relA) gene. This mutation activates the stringent response pathway, allowing VRE biofilms to endure stressful environments—in this case, higher doses of antibiotics. The researchers also noticed an increase in a specific signaling molecule called ppGpp, an alarmone that prepares bacterial biofilms to survive antibiotic exposure.

But there was a bit of a fitness tradeoff, said Jason Rosch, an assistant member of the St. Jude Infectious Diseases Department and co-corresponding author of the study. “The VRE mutants tended to be much more resistant to various antibiotic exposures, but they made overall less robust biofilm structures.”

According to Wolf, the tolerant, yet weak biofilms survived in the presence of the infant’s compromised immune system. “For this immunocompromised host, where the bacteria didn’t have to survive immune clearance, a less thick biofilm may be sufficient to establish and maintain infection. In this patient’s case, the relative tolerance to antibiotics is essentially the unkillable nature of this bug, which might have been really advantageous,” he said.

The real concern lies in infections that go on for a long time, leading to acquired mutations that make up for fitness costs. So far, no one has seen VRE mutate this way, nor are there reports of such virulence from other bacterial species in immunocompromised patients. If the bacterium had more time to produce stronger biofilms while maintaining its ability to withstand antibiotics, its spread would become a grave threat to humans. In consideration of this, the researchers tested an experimental compound called ADEP-4, which eliminated biofilms containing both VRE mutant strains and non-mutants.

The St. Jude research team hopes that someday this approach will be implemented as an important safety measure when treating immunocompromised patients. They also highlight genetic sequencing as a necessary diagnostic tool when treating bacterial infections. For now, the team can rejoice in the fact that the infant successfully overcame the severe infection, and her cancer finally went into remission.

Stockpiling, sharing and shopping for antibiotics: a hazard to public health

Sylvie Garneau-Tsodikova: overcoming resistance to antibiotics and women in STEM