The malaria parasite abounds in certain parts of the world, re-infecting individuals multiple times. Can researchers prompt our bodies to develop immunity against re-infection? 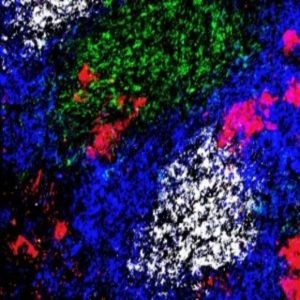 A germinal-center reaction in the spleen of a mouse infected with a malaria parasite after treatment with anti-CTLA-4. CD4+ T-cells (green), B cells (blue), germinal-center B-cells (white) and plasmablasts (red) are shown.

Researchers first identified the malaria parasite, Plasmodium, in 1880. Four different species of Plasmodium infect humans, where they suppress and manipulate the immune system to prevent infected individuals from developing immunity. This presents a specific challenge for researchers working to create an effective vaccine.

In healthy immune systems, CD4+ T-cells and cytotoxic T-cells fight infection and confer adaptive immunity, but a subset of T-cells known as T-regulatory cells (T-regs) actually suppress the immune system. T-regs are normally present in low numbers to prevent CD4+ and cytotoxic T-cells from mounting an unnecessary and chronic immune response against an antigen. A recent study led by John Harty at the University of Iowa (IA, USA) suggests that manipulating the T-reg population after malaria infection may be the key to clearing the parasite and conferring immunity against reinfection.

Sam Kurup, a member of Harty’s research team, decided to look into T-reg function in malaria after noticing a unique immune response to a non-lethal Plasmodium species in mice. “CD4+ T-cell numbers go up and then go back down temporarily before going back up,” explained Kurup. “There was no way to explain that.”

T-regs are activated by cytotoxic T-lymphocyte-associated protein 4 (CTLA-4) signaling, which hampers immune responses. For this study, Kurup blocked CTLA-4 during the phase of CD4+ T-cell expansion where the cell numbers decline. This eliminated the malaria parasite.

“People have tried CTLA-4 blockade in the past. But they blocked it at the beginning of infection and it never helped control malaria,” said Kurup. “The main take home message of our work is that you have to understand the basic immunology of an infection before you can develop a therapy.”

Depleting T-regs at this specific time point also seemed to confer memory to CD4+ T-cells, a characteristic needed to fight off subsequent infections. In further experiments following up on this idea, Harty’s team observed that T-reg depletion in mice infected with one Plasmodium species activated the immune response to fight off subsequent infection with another species.

“The truly unexpected observation we made is how negating the impact of T-regs would enhance long-term, cross species immunity to malaria. Immunity to blood-stage P. berghei [which is lethal in mice] infection in the mouse model has never been achieved before, as far as we know,” commented Harty.

Kurup plans to continue his work in this area to translate it into a clinical setting. “The primary issue with malaria is re-infection and that is where the translational aspect of this work would come into play. If you are living in an area that has malaria outbreak every year, CTLA-4 therapy becomes relevant because you can protect against future infections,” concluded Kurup.

Turning the tide on malaria: WHO approves the world’s first vaccine

The role of saliva in malaria diagnostics

Infographic: stars of the show