Geologists recently dug up 2.5 billion-year-old bacteria fossils, predating the oxygenation of Earth’s atmosphere. How did early life thrive without oxygen? 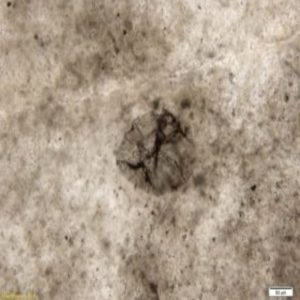 A fossil of the 2.5 billion-year-old sulfur-oxidizing bacterium at 20x magnification.

Credit: Andrew Czaja and the Geological Society of America.

When Earth was 500 million-years-old, a thick atmosphere emerged as gases bubbled up from the planet’s interior. For a couple billion years, our planet’s gassy shell contained water vapor, nitrogen, carbon monoxide, and carbon dioxide. During these eons, water vapor condensed and formed vast oceans—flowing nurseries with the right conditions for early life. Even so, the absence of free oxygen in the air would not support life as we see it today. Proof of this ancient environment is recorded in early rock formations scattered around our modern world. Scientists even hypothesized that several variants of life existed as early as 3.5 billion years ago, but microfossil evidence of such organisms is sparse.

Two years ago, Andrew Czaja, an assistant professor of geology at the University of Cincinnati, took a small group of geologists on field excursions in the Northern Cape Province of South Africa. The sites they explored harbored bacteria fossils as old as 2.5 billion years. The researchers classified the bacteria and determined that these species thrived prior to the Great Oxidation Event (GOE), a time of major change in Earth’s atmosphere and the world’s diverse ecosystem. The team reported their results in the journal Geology.

The fossils were preserved in thick sections of black chert—an opaque, silica-rich rock—which was located in the Kaapvaal craton in South Africa. Several groups of scientists theorized that this region was situated deep within the ocean during the Neoarchean eon (2.5–2.8 billion years ago) before shifting tectonic plates pushed the landmass up to the surface.

To find evidence supporting this theory, Czaja’s team looked at previous research using radiometric dating and geochemical isotope analysis of the Kaapvaal landscape. The radiometric dating determined the age of the fossils and rocks, while sulfur isotope analysis indicated sulfur cycling within the sediment. This is consistent with other fossil evidence of deep-water sulfur oxidation, revealing that metabolism was possible long ago.

Sulfur oxidation is similar to the aerobic metabolism seen in organisms today. Czaja speculates that the fossilized species ingested hydrogen sulfide and released sulfate about 200 million years before the GOE. He also mentioned that there is abundant geochemical fossil evidence of sulfate-reducing bacteria around the world from that era, which supports the hypothesis of sulfur cycling in deep-water rock during prehistoric times.

The team next looked at modern sulfur-oxidizing bacteria and found that the fossilized species they identified is quite similar to an organism thriving today—Thiomargarita namibiensis. This modern species lives in deep-ocean sediments on the continental shelf of Namibia, northwest of the fossil site. Its environment is analogous to the proposed fossilized species’ ancient habitat, as it currently resides deep within underwater sediment where no sunlight or oxygen can reach it.

The researchers also analyzed the fossil cell morphology for clues to the bacterium’s lifestyle, noting many similarities with T. namibiensis. Czaja described the elder organism as spherical, smooth-walled, and quite large. The bacteria ranged from 20 to 265 microns in diameter and occasionally occurred in small chains of 3. T. namibiensis size ranges 100 to 300 microns, though it sometimes can grow up to 750 microns. (This is the largest reported bacterium.)

“The remarkable aspect of this fossil is that it provides evidence for very familiar life in very old oceans,” said Noah Planavsky, an assistant professor of geology and geophysics at Yale University, who did not contribute to this study. “Life in our oceans has had similar players for a long time.”

So if sulfur-oxidizing bacteria could live in deep-water environments then and now, why do we not see as many of these species today? Many scientists believe this is due to the GOE.

During the Neoarchean eon, a diversity of life metabolized a variety of elements. The GOE occurred when surface-oceanic cyanobacteria slowly evolved to produce oxygen through photosynthesis. According to Planavsky, oxygen saturated the surface of oceans and the atmosphere, but these sulfur-oxidizing bacteria thrived best at the interface between oxic and oxygen-poor waters. The evolution of the environment changed the course of evolution for most life on Earth.

“A lot of people don’t think about how the Earth has changed so dramatically over its history. In fact, almost half of Earth’s history was without oxygen, yet life existed for quite some time. We’ve seen the various links that connect us to these bygone organisms and learned to not box life into a small category,” Czaja said.