A new technique to kill bacteria utilizing oxygen is on the horizon. 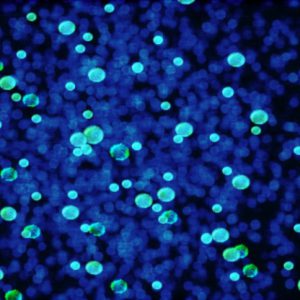 A team of researchers has reported its latest developments in the fight to kill methicillin-resistant Staphylococcus aureus (MRSA) at the 256th National Meeting & Exposition of the American Chemical Society (19-23 Aug, MA, USA). The technique utilizes light to activate oxygen, which can kill antibiotic-resistant bacteria. It is hoped that this method could even be used to treat cancer.

“Instead of resorting to antibiotics, which no longer work against some bacteria like MRSA, we use photosensitizers, mostly dye molecules, that become excited when illuminated with light,” explains Peng Zhang, associate professor at the University of Cincinnati (OH, USA) and co-author of the study. “Then, the photosensitizers convert oxygen into reactive oxygen species that attack the bacteria.”

This same technique has been previously attempted by other teams of scientists; however, not enough of the bacteria were killed to tackle the infection. Photosensitizers also tend to be hydrophobic, which makes it difficult to implement them in the aqueous solutions bacteria often exist in.

In order to overcome these issues, Zhang’s team collaborated with Neil Ayres – an associate professor at the University of Cincinnati – and his group. They worked to include metal nanoparticles, which not only promote the generation of more reactive oxygen species but are also covered with amphiphilic polymers to group together the molecular photosensitizers and deliver a more localized hit to the bacterial cells.

“If you want to attack a castle, and you just let all these people attack individually, it is not very effective. Instead, if you have the same number of people grouped together attacking the castle at one point, it is possible to cause more damage,” commented Zhang.

The bacteria were killed much more effectively than previously developed photosensitizers without metal nanoparticles. The technology can be utilized in either spray or gel form in order to effectively kill MRSA on different surfaces.

The nanoparticles have also been shown to perform effectively with red light, which has a wavelength long enough to penetrate deep below the skin. This technique also has the potential to be developed into a future treatment for skin cancer.

Antibiotic resistance in bacteria – does history play a role?

Antibiotic-resistant slime: the problem with Pel