Light-emitting polymer nanoparticles can be used for early diagnosis of cancer and intraoperative imaging-guided surgery. 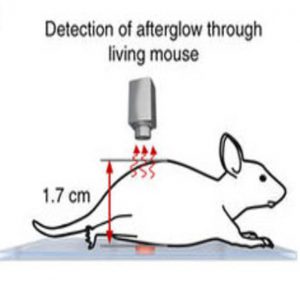 “Our nanoparticles can work as a battery to store light and release light for real-time diagnosis of diseases,” said senior study author Kanyi Pu from Nanyang Technological University. “This technology has 100-fold higher signal-to-background ratio than the traditional optical imaging technology because it eliminates the real-time light excitation and avoids tissue autofluorescence.”

Optical imaging plays a crucial role in biology and medicine. However, the need for real-time light excitation during imaging produces tissue autofluorescence, which compromises imaging sensitivity and specificity in living organisms. Afterglow optical agents, which emit light long after the cessation of excitation, hold promise for ultrasensitive in vivo imaging because they eliminate tissue autofluorescence. But afterglow imaging has been limited by its reliance on inorganic nanoparticles with relatively low brightness, and the current generation of afterglow probes poses toxicity concerns.

To overcome these challenges, Pu and his collaborators designed SPNs as biodegradable and biocompatible afterglow luminescence probes for molecular imaging in living mice. SPNs are built from optically active semiconducting polymers, and they are completely organic and contain biologically benign ingredients to avoid metal ion-induced toxicity. Due to their excellent optical properties, SPNs can be used for a variety of in vivo applications, including imaging of both tumors and neuroinflammation.

The researchers tested semiconducting polymers with different molecular structures to identify those capable of afterglow luminescence. They found that irradiation of certain SPNs, which were less than 40 nm in diameter, led to the formation of unstable chemical defects that could spontaneously and slowly break down to release photons. This resulted in long-lasting afterglow luminescence with a half-life of approximately 7 minutes, twice as long as that of existing inorganic nanoparticles.

The researchers demonstrated the usefulness of their approach for high-contrast tumor imaging and real-time monitoring of drug-induced liver toxicity in living mice. They also used the SPNs for real-time lymph node mapping, which is clinically important in guiding the surgical resection of tumor tissues. As a result of the low background noise in the absence of concurrent light excitation, the SPN afterglow permitted faster and more sensitive lymph node and tumor imaging than near-infrared fluorescence imaging. “Because of such a high sensitivity, our nanoparticles can be used for early diagnosis of cancer and intraoperative imaging-guided surgery,” Pu said.