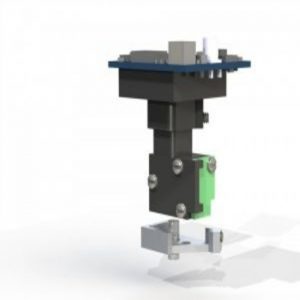 A model of the miniature fluorescent microscope (miniscope).
Source: miniscope.org

Close your eyes and imagine a favorite memory from a recent trip. It’s likely that other memories from that trip will begin popping up, recreating a little home video in your mind. But why does thinking about one memory trigger the memory of another event? Are temporally-linked memories also physically linked? Or, does the same group of neurons encode both memories?

Incredible advancements in neuroscience have steered researchers closer to answering these decades-old questions. However, techniques to manipulate neuronal activity seem to have flourished faster than techniques to visualize and monitor activity in freely behaving animals. Although there are now ways to monitor neuronal activity while a mouse performs a particular task, it remains a challenge to record responses from the same cell across time. Now, a transformative imaging tool called the miniscope, born from a multi-group collaboration, aims to address these problems.

The miniscope, a miniature fluorescence microscope originally pioneered in the lab of Mark Schnitzer at Stanford University [1], is small and portable, making it an ideal tool for studying brain activity in mice engaged in behavior. Previously-used head-fixed microscopes were large and heavy, immobilizing the tiny mice and preventing them from performing many of their normal activities.

“The miniscope allows us to see the brain as it changes and adapts to the world,” said Alcino Silva from the University of California, Los Angeles (UCLA), co-founder of the open-source website miniscope.org. In close collaboration with Peyman Golshani’s group, also at UCLA, Silva’s group redesigned the original miniscope to create a much cheaper, open-source version, thus expanding the accessibility of this novel tool to the entire scientific community.

Miniscopes can be used just about anywhere in the brain to measure the fluorescence emitted from a genetically encoded calcium indicator; every time a cell becomes active, it lights up, transmitting this information through the miniscope. “This allows us to look at the activity of the exact same neurons over many days to weeks, which is a very powerful thing to be able to do—to see how the activity of the same cells changes across different behaviors or learning,” Golshani said.

Last year, Silva and colleagues used the miniscope to study how memories are recorded in active mice (2). They exposed mice to three contextually different chambers, shocking them in one of the chambers to cause a fearful freezing response. As expected, when re-exposed to the chambers, the mice froze in the chamber where they received the shock. Interestingly, the mice also showed similar levels of freezing in a chamber where they were not shocked but where they waited briefly 5 hours before the shock. This effect was not observed during re-exposure to a chamber the mice explored 7 days before receiving the shock, lending support to the group’s hypothesis that memories formed in close proximity to one another are contextually linked. But what is going on at the cellular level?

To answer this question, the researchers infused the fluorescent calcium indicator GCaMP6f into the CA1 region of the hippocampus and then implanted a microscope lens for miniscope access. They then let the mice explore three different chambers and varied the amount of time between exposure to a new chamber. Using the miniscope, the researchers measured fluorescence, and thus neuronal activity, from individual neurons as mice explored these different contexts. They found a significantly higher overlap in the group of neurons reactivated by exposure to the chambers when the original events were 5 hours apart than when the events occurred 7 days apart.

For the first time, the researchers were able to show the neural dynamics of linking memories encoded closely in time. “Seeing really is part of believing,” said Silva. “That’s the power of imaging technologies.”

Silva, Golshani, and their collaborators have been working tirelessly to redesign the miniscope to make it even cheaper and easier to implement in labs all over the world. There are a few exciting additions to the miniscope family that they hope to debut soon.

The current miniscope system measures fluorescence that is linked to calcium signaling, a classical second messenger system. “In the future, we hope to be able to measure fluorescent indicators for other second messenger transaction systems so that way we would be able to follow not only activity of specific cells, but also whether a certain signal transduction pathway got activated in that cell during the specific behavior,” said Golshani.

Furthermore, in collaboration with the Silva lab, the Golshani lab is optimizing a wireless, battery-powered miniscope that would allow the mice to have a wider range of movement. Currently, they can only record for 20 minutes at a time with this system, since the researchers are limited by the weight of the battery.

Finally, the team is coming closer to validating an optogenetics-capable miniscope as well as a multi-channel fluorescence miniscope. These new modifications will allow researchers to ask questions about the brain and behavior that have, until now, been unanswerable. For example, researchers could activate or inhibit specific populations of cells using light and then record not only the behavioral output but also the activity of individual cells and the local circuitry in response to the external manipulations.