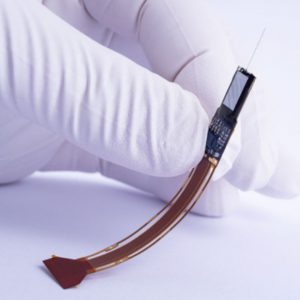 I am a group leader at the Howard Hughes Medical Institute Janelia Research Campus (VA, USA) and the Neuropixels project that I have been running for the past 5 years has just been announced for open availability.

Neuropixels are devices for recording neural signals in the brains of experimental animals, usually rodents, but also in some cases primates. They’re small micromachine silicon devices that are tens of micrometers wide, 20µm thick and 10mm long. They’re inserted into the brain and they’re covered with sensors to measure the electrical signals generated by neurons.

There are similar devices that have been used in the past but the fabrication technology didn’t allow you to have more than 12 or 16 sensors on a stick that you used to put into the brain. So, you had to choose between spreading your sensors out and having a lot of empty space or putting them close together so you couldn’t measure very much tissue simultaneously and there was a positioning problem; you had the move the probe around to get it where you wanted it.

Neuropixels has 384 simultaneous recording channels and 960 programmable sites. You can put your 384 channels wherever you want on the 10mm array and that allows you to insert the probe and begin recording, and in software, change the positioning of the recording without ever moving the probe on the animal again.

It increases the quantity of the data; the density of the recording sites are the highest that’ve been produced for commonly available devices and so that gives you redundancy to resolve the data better and in general, simply makes more data faster in an electrophysiology experiment.

Robert Philibert on a digital PCR test for addiction