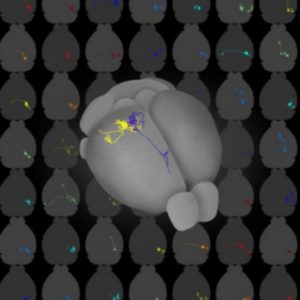 An international team of scientists from Sainsbury Wellcome Centre (London, UK), Biozentrum University of Basel (Switzerland) and Cold Spring Harbor (NY, USA) has used a new combination of methods to reveal the details of neural communication in the visual cortex. The study, published in Nature, is an exciting development of our current understanding of neural communication and has the potential to overturn traditionally held views.

Classically, models of the visual system have shown information flow from the primary visual cortex to more specialized areas that perform required functions, such as image forming and movement. However, the mechanisms of how the individual cells carry this information are poorly understood.

“Understanding the fine-scale anatomy by which individual neurons distribute signals to their targets is a crucial step for forging the relationship between neuronal structure and function.”

The team discovered that, as expected, there were dedicated single neuron projections that carried information from the primary visual cortex to the specialized areas. However, they were surprised to find that the majority of the neurons were broadcasting information to multiple target areas.

This allowed them to label the neurons with the first method and then image the projections with the second. They then used the Allen Moue Brain Reference Atlas to identify the areas in which axonal terminations were observed. The projections of the primary visual cortex neurons were found to be diverse and most of the neurons distributed information to multiple areas.

To establish if the projections were targeted or random, the team used MAPseq. This method tags individual neurons with random RNA sequences, or barcodes. When target areas are dissected they undergo high-throughput sequencing to determine the projection targets by identifying the presence of the individual barcodes.

“The RNA sequences, or ‘barcodes’, that we deliver to individual neurons are unmistakably unique and this enables us to determine if individual neurons, as opposed to entire regions, are tailored to specific targets,” explained co-author Anthony Zador.

The results showed that the majority of neurons project to targeted, and not random, areas.

Mrsic-Flogel is hopeful the research can help further the understanding of these complicated communication patterns.

“The next piece of the puzzle will be to understand what each of these projection motifs does for visual processing and perception and how these long-range connectivity patterns are established during development.”