Coffee and cake traditionally go hand in hand. But new research shows that caffeine might change your perception of sweetness. 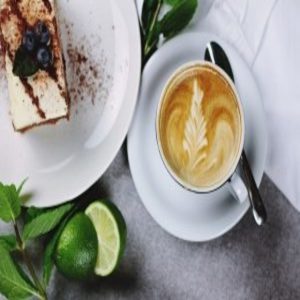 Drinking tea or coffee is a morning ritual for people around the world, as widespread as the tradition of pairing it with something sweet. But does that jolt of caffeine affect how we perceive taste? In a recent paper published in the Journal of Food Science, researchers at Cornell University suggest that caffeine does, in fact, temper your taste buds temporarily.

Caffeine boosts alertness as it blocks adenosine receptor activity, which promotes sleepiness. “The inspiration for this study came from previous research carried out in rodents by Robin Dando, which found that sweet taste could be enhanced through adenosine receptors in the taste buds,“ said Ezen Choo, first author of the study. Choo, along with co-authors Benjamin Picket and Robin Dando, decided to investigate whether caffeine also altered the perception of sweetness in humans.

To test the effect of caffeine on taste, the team recruited 107 healthy volunteers and offered them lightly sweetened decaffeinated coffee. To half of the cups, they added 200 mg of caffeine to make it strong, and to the other half, they added quinine to make the coffee equally bitter in taste to the caffeinated cups. Then they asked the participants to rate the sweetness of the coffee, along with solutions of varying tastes. Those who consumed caffeine rated the sweet solutions lower than the other group, although of all the other tastes were perceived the same.

“What surprised us was that the participants [given caffeinated samples] still perceived the sweet solutions as less sweet even 10-15 minutes after they had finished their coffee,” said Choo. If sweet-sensitive taste buds are tempered even a few minutes after drinking caffeine, it may lead some people to consume more sugar.

Although the study volunteers did not know when they received the caffeinated coffee, when the researchers asked them to rate their alertness, all participants thought they were more alert, even when they drank the decaffeinated coffee. This implies that a potential placebo effect confers alertness after drinking coffee.

“Based on these results, it seems that more people could try drinking decaffeinated coffee to help reduce their consumption of sweets, but still get that same level of alertness,” said Choo.

Although the group does not have immediate plans to follow up on the effect of caffeine on sweet taste perception, they are pursuing several other investigations into how things such as the environment, obesity, or pregnancy alter taste.