Saving the Heart, with the Help of Algae - BioTechniques

Saving the heart, with the help of algae

A photosynthetic algae supplies critical oxygen to the heart muscle during a heart attack. 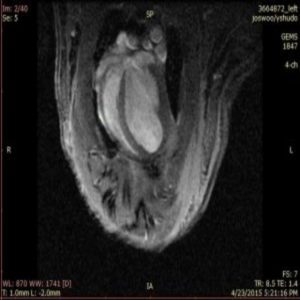 Cardiac MRI of an animal that has undergone photosynthetic therapy (1).

When a patient rushes to the hospital in the midst of a heart attack, doctors race against time to open the blocked artery and restore blood flow to the heart—all before the oxygen-starved cells begin to die. Now, an innovation from biomedical engineers led by Joseph Woo at Stanford University promises to deliver oxygen quickly where it is needed—with the help of photosynthetic cyanobacteria.

“When I walk around outside, I see trees whose cells take up carbon dioxide and, with the power of light and photosynthesis, convert that back to oxygen. So I wondered whether that’s a natural process we could harness inside the starving heart,” Woo said.

Initially, the researchers ground up spinach and kale to isolate chloroplasts, but the organelles were not stable outside plant cells, so they turned instead to chloroplasts’ ancestor: a free-living, single-celled photosynthetic algae called Synechococcus elongatus. They cultured S. elongatus with mammalian heart cells in a tissue culture dish and confirmed that when the algae received light, they produced oxygen that the heart cells could consume.

To look at long-term outcomes, the researchers examined the rats’ hearts 1 month later using magnetic resonance imaging. They found that the hearts of animals that received photosynthetic algae with light had less scarring, more surviving muscle, and better contraction than the others.

Although the technology isn’t developed to the point of delivering these algae to humans yet, Woo is working on making this a reality. One thing that his team needs to figured out is how to deliver the photosynthetic algae to the heart of large animals by either direct injection into the heart or delivery through a vein.

The second problem is how to deliver light into a patient. Performing open-heart surgery on a patient during a heart attack would do more harm than good. Woo suggested using a tiny fiber optic cable to deliver light inside the body. Alternatively, using wavelengths of light that can penetrate the skin, such as infrared light, might work.

“You can imagine how, in a human being, you could deliver the photosynthetic material to the heart and shine an infrared light over the heart, and it might deliver just enough oxygen to save a lot of heart muscle on the ambulance ride to the hospital,” Woo said.

This approach may offer potential for treating stroke—where starving brain cells die every passing minute—and even chronic diseases where there is decreased blood flow to an organ.