Is the widely accepted RNA world hypothesis wrong? Two researchers say that it is. 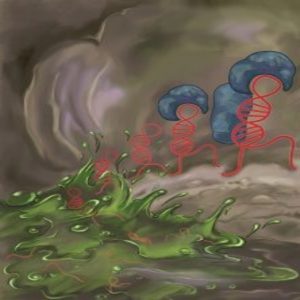 The commonly accepted view of how life originated on Earth—the one that everyone learns in high school—is that RNA molecules catalyzed the first reactions to eventually form living organisms. This RNA world hypothesis has dominated the scientific community for decades. But now, is it time to say goodbye?

In two papers published in Molecular Biology and Evolution and Biosystems, Charles Carter from University of North Carolina-Chapel Hill and Peter Wills from the University of Auckland in New Zealand argued that the RNA world hypothesis is insufficient to explain the origin of life. Instead, they provided experimental and computational evidence for an RNA-peptide world, in which early life originated from the interplay of RNA and peptide activity.

In thinking about the origin of life, it is hard to explain how peptides, which carry out transcription and translation, could have essentially created themselves in an RNA world. “It’s the information which builds the system that interprets the information,” said Wills, describing what is known as a “strange loop.” “How in the world did we get like that?”

Carter and Wills struggled independently to gain acceptance for their theories for many years until they discovered one another and decided to team up. “We clicked in terms of our understanding of what the problems are in the origin of genetic coding,” said Wills. “From there, I visited him and we have conversed and compared notes and sometimes argued.…Together, we managed to formulate this point of view.”

Wills focused on mathematical theories and computational simulations to show that the “strange loop” could not have arisen in an RNA-only world. “We’re not saying RNA doesn’t do anything—we’re saying the explanation of the origin of life, particularly the origin of coding in terms of the RNA world, is a failure. If you have proteins from the start, that can rapidly improve in terms of computation feedback,” said Wills.

On the other hand, Carter provided experimental evidence in his studies of aminoacyl-tRNA synthetases (aaRSs), which link tRNAs to amino acids and allow for translation of the genetic code. By studying different classes of aminoacyl-tRNA synthetases, Carter proposed a simple system that could model the beginnings of the genetic code.

According to Carter and Wills, RNA has a limited ability for catalysis compared to peptides, and would have struggled to maintain its catalytic activity under the changing temperature conditions of early Earth. Carter and Wills also argued that if an RNA world existed, it would have been unlikely for it to incorporate peptides later on.

Rudolf Füchslin, a professor at the Zurich University of Applied Sciences who was not part of these studies, likened the system to a carpenter who switches from working with wood to working with metal; the carpenter’s initial productivity declines because of unfamiliarity with the material. “Evolution is very powerful but blind,” said Füchslin. “If evolution doesn’t produce an immediate benefit, then the step will not be taken.”

Carter and Wills’ RNA-peptide world theory is controversial in the scientific community where the RNA world hypothesis has long held an uncontested position. “We continue to experience pushback because the RNA has been written into textbooks and it’s supposed to offer the pathway all the way through from replication to translation,” said Wills. “We’re taking on the accepted view, and people will only change their minds when they take a good look at something and see what the problems are.”

Füchslin is optimistic that Carter and Wills’ theory will continue to gain traction. “[Carter and Wills] addressed a well-known problem and they did it in quite a convincing manner,” said Füchslin.

At the end of the day, Wills finds inspiration in trying to answer one of the biggest questions in biology: how did we come to be? “It changes our whole perspective on biology because we don’t see ourselves as merely colliding molecules,” said Wills. “We see ourselves as belonging to a part of nature that has intrinsic organization, and in particular, meaning in matter.”

Are sponges our great ancestors?

Vindication for a misunderstood polymerase