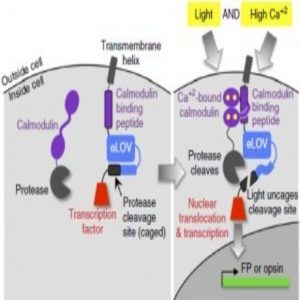 A thought, an epiphany, a decision, a shift of attention—these cognitive processes generally occur quickly, on the order of a few seconds. For centuries, scientists have wondered what type of signaling activity was sufficient and necessary to facilitate such events.

Traditional cell-labeling techniques took far too much time to detect these processes because they were limited to capturing cell activity over periods of hours or days. Now, Kay Tye, a neuroscientist at the Massachusetts Institute of Technology, and her colleagues have developed a new technique that harnesses calcium activity in neurons, allowing them to label neurons as they fire. This increase in temporal precision provides what Tye calls a “snapshot” of activity that can help researchers better understand what neurons are doing in the moment of a given cognitive process.

“This is an obvious tool to want. But it’s been an incredible engineering challenge—which is why there’s been a lag in being able to develop something like this,” Tye said. “Past labeling techniques worked only when the animals were exposed to a drug that activates the system—and you have to wait for it to go through the system, which just takes quite a bit of time.”

She and her colleagues created an engineered transcription factor called FLARE that reacts to elevated calcium levels (calcium levels rise as neurons fire) and blue light. The combination of the two turns on a target gene previously engineered into a cell’s genome, which then allows the cell to be labeled.

“We use a lot of calcium indicators in optogenetics. And light always seemed like it would be a good window opener, just because it’s one of the most temporally precise tools that we have,” Tye explained. “The two together allow us to be maximally specific, which is what we wanted, so we can get that snapshot within a minute or so.”

It took the researchers 5 years to come up with this proof-of-concept technique, and Tye believes that the “intrinsic design components” are there. But, she said that FLARE needs to be further refined by other research groups to help it reach its true potential.

“It’s now up on AddGene, and we really want people to use it. Then, once people start using it, they can make iterative improvements, and we can proliferate the same type of optogenetic toolbox with temporally precise activity-dependent tagging,” she said. “We are really excited about the possibilities because the lack of temporal precision has been a major gap in the toolkit so far.”