The Persistence of Epigenetic Memory - BioTechniques

The persistence of epigenetic memory

Nematodes transmit information about their environment, such as temperature or availability of food, across generations. 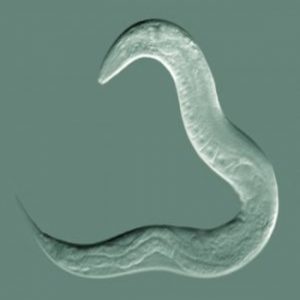 Caenhorhabditis elegans embryos develop quickly and reach adulthood within a few days—at least in the lab, where they experience steady temperatures. But out in the wild world, the temperature goes up and down with every sunrise and nightfall, not to mention changes that come with each season. It would be to the nascent worm’s advantage to have some information on what temperatures the last few weeks have brought and be able to adjust its metabolism accordingly, according to Adam Klosin, a postdoctoral fellow at the Max Planck Institute of Molecular Cell Biology and Genetics in Dresden, Germany.

Indeed, worms may do just that: In the journal Science, Klosin and colleagues report that the nematodes’s germline can “remember” the temperatures experienced by recent ancestors, thanks to inheritance of epigenetic marks. In one experiment, an artificial transgene array influenced by high temperatures maintained the heat-influenced high expression levels for 14 generations (1).

In people, effects of famine or abundance echo in offspring. For example, babies born during the Dutch Famine of World War II were smaller than those born the year before, and this effect persisted in their children and grandchildren. And in Sweden, an abundance of food experienced by a boy was linked to diabetes in his grandchildren (reviewed in Reference 2).

In nematodes, researchers have observed gene silencing due to high temperatures, dietary restriction or starvation, viruses, or transposons. Scientists are just beginning to work out the mechanisms for this; Klosin found that gene silencing by histone methylation was crucial in his system, and other researchers are pursuing pathways mediated by small RNAs.

Klosin defines “epigenetic inheritance” as any persistent trait that occurs in the absence of genetic changes. The nematode C. elegans, long a favorite of geneticists, offers an apt model for exploring this epigenetic transmission, too. Its 3-day generation time makes C. elegans a convenient model organism for multigenerational studies. And thanks to the worms’ hermaphroditism, the animals can self-fertilize, yielding hundreds of offspring genetically identical to the homozygous parent line. That way, any changes to gene expression ought to be due to epigenetics.

But Klosin wasn’t originally looking for transgenerational inheritance. He was studying regulation of the chaperone protein DAF-21, also known as heat shock protein 90, using a reporter mCherry construct tied to the daf-21 promoter.

While 20°C is the standard temperature for a nematode incubator, worm geneticists often use different temperatures to activate temperature-sensitive mutations or simply to manage the animals’ growth speed. Going away for the weekend? Slow things down at 16°C. Eager to produce a large population? Speed up development at 25°C.

When Klosin kept his worms at 25°C, they glowed red because the heat shock promoter was activated. When he returned, the worms and their offspring to 20 °C, the effect didn’t disappear—not completely. The offspring of worms that spent time at 25°C glowed a bit more dully than their parents, but brighter than worms from a line kept consistently at 20°C. “We accidentally observed… that they have this large expression difference that’s inherited,” said Klosin.

When he tried the same experiment with a larger array of mCherry genes, the effect was more pronounced. “The longer you grow the worms at 25[°C], the higher the expression,” said Klosin. “This means there is also a ‘memory’ of low temperature.” This effect maxes out after 4 or 5 generations grown at 25°C.

Based on past research on epigenetic inheritance, the authors suspected that small RNAs might be transferring the information from one generation to the next. To find out if that hunch was correct, they crossed worms with high mCherry expression to those with low levels. All of the resulting worms had similar mCherry levels, as would be expected if the small RNAs from sperm and egg mixed together in a zygote. Then, the researchers crossed their F1 generation with wild-type hermaphrodites. They expected to again see similar average mCherry levels due to the small RNAs transmitted in the sperm.

Instead, 50% of the worms had high levels of mCherry expression, and 50% had low mCherry expression. “The trait segregates with the chromosome,” Klosin concluded. That is, the genes from the high-expresser P generation kept expressing high mCherry levels, and the ones from the low-expresser grandparents maintained their levels, too.

Like humans and other animals, methylation of histone 3 lysine number 9 (H3K9) is a common, gene-silencing epigenetic marker in C. elegans. When analyzing the mCherry array at the molecular level, Klosin and colleagues found that the grandchildren of 25°C worms had fewer repressive H3K9 methyl marks than those that descended from 16°C grandparents. But when they inactivated set-25, which encodes the putative histone methyltransferase, the temperature effect disappeared.

The authors propose that high temperatures inhibit SET-25 protein, causing some of those histone markers to disappear from the germline. Subsequent generations express the mCherry array more fully, until, eventually, low temperatures allow SET-25 to replace the silencing marks. Klosin cautioned C. elegans aficionados working with artificial transgenes to be wary when they switch their worms between temperatures; the effects might not fade as quickly as they think.

He found that some endogenous genes, especially transposons, also relied on the effects of SET-25 repression to raise their expression at high temperatures, with the effects lasting as long as 5 generations after a return to 20°C.

RNAs in the Germline

Researchers first discovered RNA interference (RNAi) in nematodes and plants, and are now finding similar small RNAs at work in worm germline epigenetic inheritance, explained Oded Rechavi of Tel Aviv University in Israel, one of the scientists studying the phenomenon. When nematodes are exposed to double-stranded RNA—perhaps from a virus—they chop it up into primary small RNAs. These bits base-pair with mRNAs and recruit protein machinery to synthesize secondary small RNAs. These secondary RNA snippets enter the nucleus and recruit regulators, such as chromatin modifiers, to silence transcription.

In 2011, Rechavi reported that small RNAs against foreign viral genes are transmitted across generations (3). “These small RNAs vaccinate the next generation from additional rounds of viral replication,” he said.

Then in 2014, he found that the same transmission can occur for non-foreign, endogenous genes too. Starving the worms led to small RNA transmission through the next three generations. The RNAs targeted genes involved in nutrition and gave the F3-generation worms an enhanced lifespan (4).

“We want to understand the rules of this inheritance,” said Rechavi. One of his first questions was how the RNA-based memory fades after a few generations.

In 2016, Rechavi reported on a molecular timer for transgenerational gene silencing (5). The initiation of a new RNAi response competes with and downregulates production of other, endogenous small RNAs that are specific inhibitors of the RNA inheritance machinery. That allows the inheritance machinery, consisting of proteins that transport the small RNAs across the germline, to function. But after three to five generations, the endogenous small RNAs win out, shutting off the inheritance system.

“It’s like a transgenerational clock,” said Rechavi. By mutating genes involved in the clock, he could make inheritance of small RNAs and their effects last forever (5,6).

Though Klosin focused on the role of histone methylation in his Science study, he can’t fully discount the involvement of small interfering RNAs in the transmission of temperature memory. “We suspect they do have some role,” he said. Rechavi agreed.

Rechavi also suspects that despite the differences between human and nematode epigenetic systems, the findings from his lab and others might turn out to have a counterpart in human biology. “Many things that were in the beginning thought to be peculiarities of worms, were later found to be true in humans,” he noted, citing RNAi itself. “The details might change, but it could be relevant.”