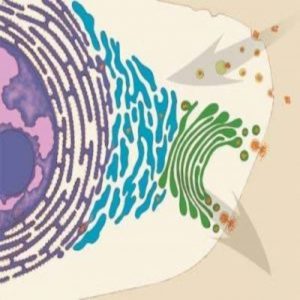 Cellular resources are limited—and high protein expression levels can overwhelm these resources and interfere with cell function. In a study published in Scientific Reports, researchers showed that high demands on the transport machinery used to localize proteins to intracellular compartments can also exhaust cellular resources and cause cellular growth defects. According to the authors, insights into the overloading of protein localization processes could be beneficial for cellular engineering and disease treatment.

Using the genetic tug-of-war (gTOW) method they previously developed, the researchers estimated the overexpression limits of signal-modified GFPs in budding yeast cells. In a gTOW experiment, they measured the copy number of an expressed gene and the growth rate of the cells to estimate the level at which protein expression leads to cellular growth defects. On the basis of these measurements, Moriya and colleagues evaluated the overloading of localization resources corresponding to various cellular compartments and analyzed the cellular defects triggered by these loads.

The researchers also measured the protein expression limits of GFPs with localization signals. Although the limit of GFP was 15% of total protein, the limits of MTS-GFP, NES-GFP, and SS-GFP were 4%, 1%, and 0.7%, respectively. “For cellular engineering, knowing the cellular capacity of protein production in each organelle is important, especially when we want to produce a large amount of proteins within the cell,” Moriya said.

The findings could also have relevance to cancer treatment, given that the simultaneous overexpression of many proteins in cancer cells likely overwhelms the capacity of the transport machinery. “We think that further stress in the transporting processes will specifically kill cancer cells,” Moriya said. “This could be a novel strategy to treat cancer.”

The BioTechniques guide to ASCB/EMBO 2019

Splitting the details of protein aggregation

Single-use plastics: are they safe?