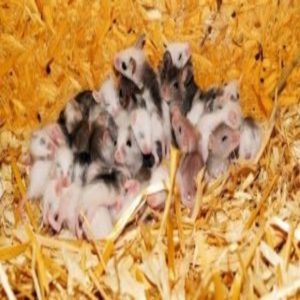 Along with lightsabers, loud explosions in space, and perfectly anthropomorphic aliens, one of the ways in which sci-fi movies gloss over real-life practicalities is by deliberately ignoring the exposure to dangerously high levels of radiation that any space-faring citizen (and their reproductive cells) would face.

A recent study by Teruhiko Wakayama and colleagues at the University of Yamanashi, Japan, however, shows that there may still be hope for those envisaging a starry future for mankind. Mouse sperm freeze-dried and stored in the International Space Station (ISS) for over 9 months created embryos that developed into perfectly healthy pups.

The level of cosmic radiation in the ISS is over 100 times the level observed on the earth’s surface. Sustained exposure to such radiation can cause DNA damage in both normal and reproductive cells. Since any form of space exploration or colonization in the future will involve humans staying in space for long periods of time, studying the effects of radiation exposure on reproduction is essential for the survival of the species.

To check if sperm stored in space remain viable after long periods of exposure to cosmic radiation, Wakayama and colleagues preserved mouse sperm samples using a technique known as freeze-drying. This technique, while technically killing the sperm cells, still lets them retain the capacity to fertilize oocytes, and the samples can be stored at room temperature for over 2 years. The preserved sperm samples launched into orbit in August, 2013, where they remained on the ISS for nearly 300 days.

Upon being brought back to earth, the researchers observed that the space sperm samples had undergone mild DNA damage. However, they were still able to fertilize oocytes in vitro and give rise to viable embryos that could be implanted onto a surrogate mouse womb. The impregnated mice gave birth at normal rates to healthy offspring, showing that the observed DNA damage did not adversely affect the health of the offspring. The offspring grew up to become healthy and fertile adults.

The authors believe that the findings may influence potential domestic animal breeding in space. “It is really a technical breakthrough,” said Jose Cibelli from Michigan State University, who was not associated with the study, “It hasn’t been done before, and the efficiency seems to be very good.” Cibelli suggested that the next step may be to obtain viable clones from somatic cells stored in space or from oocytes.