A virtual reality for animal studies

Virtual reality allows animal behaviors to be studied whilst moving freely, as opposed to previous studies in which animals were restrained. 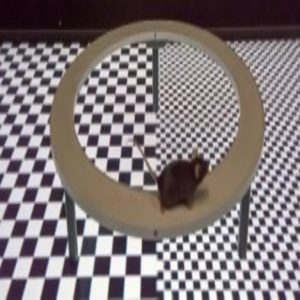 Mice had an aversion to heights in both the real-world and VR conditions. Credit: IMP/IMBA Graphics Department, https://strawlab.org/freemovr

A team of researchers from institutes across Germany and Austria, including the University of Vienna (Austria), has developed technology that can place certain animals in virtual reality (VR) systems, without being tethered down, in order to study their social interactions and behaviors.

“The fundamental challenge with experiments on social behavior is that it is difficult to control interactions between real animals,” explained Andrew Straw, an author of the study and professor at the University of Freiburg (Germany).

“With VR in unrestrained animals, the interaction can be with one or more ‘animals’, which are in fact images controlled precisely by a computer program.”

The study, published in Nature Methods, details how the technology was developed in order to eliminate any potential discrepancies in behaviors from previous studies where the animals have been restrained. Utilizing this technology, the animal in question – namely flies, fish and mice – can move freely to interact with virtual models.

“This is particularly important for studies on spatial cognition, where it is clear that animals use external sensory cues when available, such as visible landmarks, and internal cues, such as distance walked.”

The VR system, labeled FreemoVR, enables scientists to perform experiments to investigate how sensory cues are integrated in the brain. The animals were tracked in 3D and video game technology was used in order to create an artificial environment.

It was then tested on fruit flies, zebrafish and mice; enabling the neurobiological study of the animals in many different environments, including how a mouse behaves with an aversion to heights.

Straw hopes the VR system can be of use in the future within the pharmaceutical industry:

“A typical problem when testing anti-anxiety drugs is that dosage can be very critical. If given too high a dose, the animal may not move due to lethargy, making it impossible to test the effect on anxiety-related behaviors.”

“Our hope is that with VR we could better distinguish between lethargy and anxiolytic effects and improve the efficiency and efficacy of drug testing protocols.”