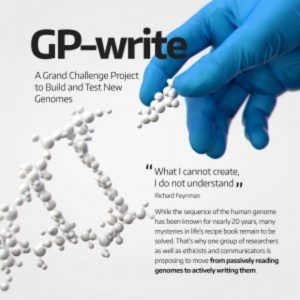 The leadership of the GP-write project – Jef Boeke from NYU Langone Medical Centre (NY), George Church from Harvard medical School (MA), Andrew Hessel from Autodesk Inc (CA) and Nancy J Kelley from New York Genome Center (NY, all USA) – have announced their project’s latest developments.  Updating the goals of their seminal GP-write paper, published in Science, the team have announced that they are developing ultra-safe cell lines that could have a major impact on human health.

The new cell lines are considered ultra-safe because of their resistance to infection by pathogens, as Jef Boecke explains:

“The ultra-safe cell lines, made using technologies broadly mammalian species, are aimed at complete resistance to all viruses and prions, and partial resistance to senescence and cancer, plus biocontainment.”

How does this translate to human health? Many pharmaceutical companies undertake expensive monitoring of their cell lines to prevent pathogen infection because a viral infection could decimate a cell line and cause millions of dollars of damage.

This work advances the overall goals of the GP-write project and will be modelled on the Sc2.0 project that was led by Boeke.

“The overall GP-write project is focused on writing, editing and building large genomes. We will generate a wealth of information connecting the sequence of nucleotide bases in DNA with their physiological properties and functional behaviors, enabling the development of safer, less costly and more effective therapeutics and a broad range of applications in other areas such as energy, agriculture, healthcare, chemicals and bioremediation,” commented Boeke.

To create the virus-resistant cell lines the team hopes to use a process called DNA recoding, whereby the genomes are edited to change different codons to enable resistance. Although this has already been demonstrated in bacteria by Church, he believes that sufficiently recoding plant and mammalian genomes could take 10 years due to the necessary number of changes:

“Recoding every protein in the human genome, for example, would require 400,000 changes.”

The group’s aims are ambitious and they will rely on significant improvements in synthetic and artificial genomes. Current artificial gene synthesis is slow, as each nucleotide needs to be carefully stitched to another and that is even before the process expands to include artificial chromosomes or entire genomes. However, once synthesized, these genes can be implanted into living cells and then tested.

The group is hopeful their work in the coming years will speed up and lessen the cost of this process. They are currently working on rewriting the yeast genome, at 12 million bp, as a precursor to moving onto the vast human genome, which is 3 billion bp per set of chromosomes.

The evolution of CRISPR