While exploring how to connect replacement organs within the body, researchers induced extraordinary neuronal plasticity that enabled a blind tadpole to see through its tail. 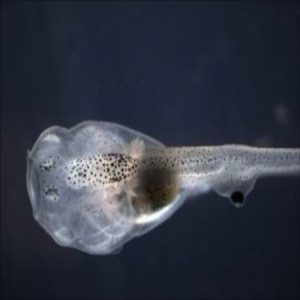 The African clawed frog (Xenopus laevis) is an odd creature. It is flat and slippery, with bulging eyes on top of its head and feet that are both clawed and webbed, and it lacks a tongue and teeth. Despite its odd appearance, Xenopus has contributed a surprising amount of biological knowledge. Its eggs are regularly used in signal transduction studies or for the preparation of cell-free extracts for DNA replication and repair experiments. But it is most famous for its role in studies of development.

In the early 1900s, Hilde Mangold and Hans Spemann conducted a series of cut-and-paste experiments using Xenopusembryos, selectively removing cells or portions of the embryo and sometimes replacing them in other locations. Through these experiments, they were able to work out exactly how each portion of the developing embryo progressed and what role it played in directing other developing tissues.

Now, researchers at Tufts University have conducted a new series of cut-and-paste experiments, removing developing eyes from Xenopus tadpoles and placing them into the heads—and tails—of blind tadpoles to learn how to innervate transplanted organs.

“Scientists are becoming quite good at growing tissues, organs, and sensory structures with the hopes of treating disease or trauma. However, what’s less understood is the best way to connect these components to a patient,” said Douglas Blackiston, who conducted the studies with Michael Levin and Khanh Vien. “Our result supports the idea that the central nervous system contains an impressive degree of plasticity, which we hope can be leveraged in the future for better patient outcomes.”

Looking Through Another Lens

In the 1980s, researchers used Xenopus to fully analyze eye development, mapping out the precise pathways for eye induction, lens formation, retinal axon pathfinding, and vascularization. Over time, scientists amassed enough knowledge to eventually microinject specific mRNAs and cause eyes to grow on parts of the tadpole body where they didn’t belong. While researchers could look at the vascularization of these eyes, trace neurons connecting them to the spinal cord, and even record neural impulses, they couldn’t tell if these animals could actually see through their unnatural eyes.

When working with more advanced animals, behavioral tests and learning challenges readily show how they perceive the world around them. Frogs, however, aren’t as cooperative. In the early 1960’s, researchers attempted to teach a frog to avoid a certain area of a tank using electric shock, only to discover that the frog might simply stay where it is and choose to die rather than avoid the shocks. This led to the proposal that frogs simply can’t learn in a laboratory setting.

Finally, in 2012, Blackiston and Levin hit upon the right visual test for tadpoles, discovering that they respond to colored light (1). Now, the researchers were finally armed with the right tools to determine whether or not frogs can see through transplanted eyes. The team removed the eye primordia from several tadpoles, using some of these blinded animals as controls, and then implanted eye primordia into the heads or along the bodies of other blind tadpoles. In 2013, they reported that tadpoles missing their natural eyes learned in response to patterns of colored light when they had a single ectopic eye anywhere along the body, except at the tip of the tail (2).

“It was one of those great results where you immediately have a ton of follow up questions,” Blackiston recalled. “How do the eyes work? What connections do they make with the host? Could this translate to mammals or humans? You know you’ll have enough interesting projects to keep you busy for a while.”

While the ectopic eyes enabled tadpoles to see and respond to colored light, most still didn’t perform well on learning tests. Further studies showed that the majority of the transplanted eyes failed to innervate within the hosts.

With the goal of using this model to advance regenerative medicine, the researchers needed to improve innervation. And the model also offered a unique opportunity to explore the relationship between the brain and the body. “We wanted to look at brain plasticity,” said Levin, who led the work. “How do brains respond when the body architecture with which they evolved is radically altered?”

The team repeated their eye grafting experiments, but this time injected the eye donors with mRNA for a fluorescent protein so that they could use fluorescence microscopy to follow how the donor eye integrated into the host. To facilitate innervation, they turned to drugs.

“We had some idea of where to focus based on our prior studies, but we still ended up testing a large suite of drugs before arriving at the specific one used in the current work,” said Blackiston. The researchers settled on Zolmitriptan, a serotonin receptor activator commonly used to treat migraines.

When the team placed a new eye into the head of an animal and treated it with Zolmitriptan, far more tadpoles learned based on colored light cues. The team developed another test for visual acuity by projecting patterns for the animals to follow while swimming; blind tadpoles with grafted eyes and drug treatment performed far better than untreated tadpoles.

Levin and Blackiston next looked at the tissues of tadpoles with eyes transplanted into their heads and observed labeled neurons innervating the brain. On the other hand, eyes placed in the tail never directly contacted the brain but instead connected only with the spinal cord (3).

“The brain can pick up information from all portions of the body via the spinal cord and other tissues,” Levin explained. “The question is, how does it know that’s visual data coming from its back? We definitely hope to study the network and, more importantly, the encoding/decoding that allows the brain to know how to contextualize the data.”

Eye on the Prize

The extent to which Zolmitriptan improved innervation opens a new door for researchers working in regenerative medicine. A multitude of ion channel and neurotransmitter drugs are already approved for human use. Many of these might influence how an implant, whether bioengineered or biological, integrates into a host.

In addition to looking into how the brain interprets signals coming from ectopic eyes as visual cues, Levin’s team also plans to develop new models for testing the limits of brain plasticity, and possibly even increase that limit. They plan to test other organs placed in unusual body constructions, “Probably nostrils next, as well as tails, and possibly organs that don’t belong on a frog at all—axolotl gills or limbs, for example,” Levin shared. “Moving other organs around will show that the plasticity is not vision-specific, but more genera—or not. We want to understand the broad ability of the brain to learn to control widely different bodies.”

Levin also plans to look into creating a mammalian model of implant connectivity and to find out what cues cells use to tell if they are in the right place. “One of the most important parts of this study was showing that while the ectopic (new eye) tissues responded to the drug by hyperinnervating, the body’s normal innervation ignored it entirely and remained normal,” he said. “Only neurons that were in the wrong place responded, which means neurons know if they are in the wrong place or not. Understanding how this works is the key to many biomedical issues, including cancer and birth defects.”

Inflammatory cell reversion: plastic surgery to be replaced as the primary treatment for ulcers?