Researchers discover how to make stem cells swell or stiffen, predisposing them toward fat or bone formation. 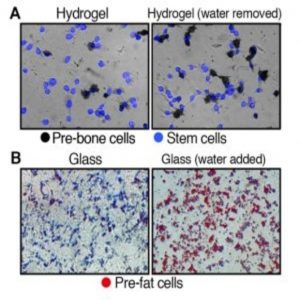 Cell volume is highly regulated and dynamic, increasing as the cell grows and decreasing once it divides. But what drives fluctuations in volume? A research team from 10 different institutions working to answer this question discovered that changing stem cell volumes disrupts their internal dynamics enough to simulate the effects of environmental pressures.

“Stem cells might alter their water content as they touch down on a stiff substrate,” said cell biologist and co-senior author Jennifer Lippincott-Schwartz at Howard Hughes Medical Institute. “Could those changes affect the net crowding of proteins within the cell, thereby altering its fate?”

Originally, the investigators explored what happens once stem cells enter a stiff or soft environment by putting stem cells with normal cell volumes into hardened hydrogel substrates, simulating the rigid environment of bone cells. After a week, most cells developed into pre-bone material. Repeating this experiment with cells in softened hydrogel showed that significantly fewer stem cells became pre-bone cells.

However, once the team reduced the water volume in the cells, many more stem cells developed pre-bone properties, despite their cushioned environment. Similarly, when they added water to stem cells placed on glass, they rapidly transformed into pre-fat cells instead of displaying the usual bone-like traits associated with rigid surroundings.

In normal circumstances, “this reduction in cell volume is due to water being squeezed out of the cell,” said Lippincott-Schwartz. Although exactly what drives water removal is unclear at this point, the authors suspect that as the cell senses a stiff or soft environment, “either water channels open up, or ion channels shift directionality to drive an osmotic gradient so water moves out,” she explained.

“While previous studies of stem cell cultures showed soft gels are adipogenic and stiff gels are osteogenic, this research interestingly suggests that differences in osmolarity and nuclear volume in tissues [drive differentiation],” commented biophysicist Dennis Discher at the University of Pennsylvania, who did not participate in this study.

Since stem cells are foundational for regenerative medicine, pinpointing exactly how and why they differentiate will help scientists refine methods to influence their behavior and, ultimately, develop future stem cell–based therapies.