A new method can capture detailed information about all four phases of the cell cycle in real time using fluorescent proteins. 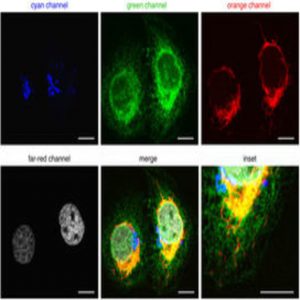 Michael Lin was always curious about cell biology, but he became fascinated by the cell cycle during his undergraduate days. He eagerly set off on his career with the goal to pin down the mechanisms that controlled this complex life process.

“In biology, the easiest way to have a large impact and help many people is [when] you develop new or improved tools, because usually studies in biology are limited by the technology we have,” said Lin, who was trained by Michael Greenberg at Harvard University and the late GFP pioneer Roger Tsien at the University of California, San Diego.

The Origins of FUCCI

Studying biology using light-emitting and absorbing proteins detected by fluorescence microscopy first became popular after Tsien’s team modified the jellyfish GFP to create a wide panel of colors, a field now known as wavelength engineering. Tsien showed that a fluorescent protein’s light-emitting properties can be changed by engineering the light-emitting portions of the molecule, or chromophore.

Scientists around the world clearly realized the potential of using fluorescence imaging to study the progression of the cell cycle in 2008, when Atsushi Miyawaki at RIKEN in Japan showed that it was possible to study a cell’s transition from G1 to S phase in cell lines and in mice using FUCCI.

The expression levels of two closely linked proteins in the eukaryotic DNA replication network came in handy for Miyawaki’s team when visualizing the cell cycle. Chromatin licensing and DNA replication factor 1 (Cdt1) “licenses” DNA to replicate during the cell cycle. Geminin inhibits Cdt1, preventing it from re-replicating DNA. Geminin levels peak during the S and G2 phases, but plummet during late mitosis and G1. On the other hand, Cdt1 levels peak in G1 phase just before DNA replication begins and plummet abruptly at S phase.

Miyawaki’s team tagged the wavelength-engineered fluorescent reporter proteins mKO2 and mAG to the degradation signals (known as degrons) of Geminin and Cdt1. As cells move from one phase of the cycle to the next, Miyawaki’s team could image cells in G1 in one color and those in S, G2, and M phases in another (2).

“[This] original FUCCI is terrific, easy to use and powerful. But it didn’t allow you to see all four phases of the cell cycle,” said Lin.

In 2010, Norman Zielke from the Genome-scale Biology Research Program at the University of Helsinki, Finland began using FUCCI to follow cell-cycle regulation in Drosophila, but he ran into difficulty using the reporter proteins that Miyawaki’s team developed.

“The Cdt1 part did not work because the flies had [a] different Cdt1 degradation pathway than humans and mice,” said Zielke.

Zielke’s team moved on to discover that S-phase specific degradation of the transcription factor E2F is crucial for cell-cycle progression in Drosophila (4). “Then it clicked for us. Why not base a FUCCI system on E2F instead of Cdt1?” recalled Zielke.

Playing with different chromophores, Zielke’s team finally described fly-FUCCI in 2014 (5). To see the cell-cycle progression, they fused GFP to the degron of E2F and mRFP (red fluorescent protein) to the degron of Cyclin B, which is degraded in the same manner as Geminin. Using these fly-specific FUCCI probes, the team saw the G1, S, and G2 phases of the cell cycle as well as the transition between these phases before the cells enter into mitosis.

To expand FUCCI to image all four phases of the cell cycle, Lin and his team used four different wavelength-engineered reporter proteins to tag four cell-cycle related proteins. “Each one has a different color so we can use different wavelengths of light to excite them,” said Lin. Since the colors—cyan, green, orange, and far-red—are separated far enough in the electromagnetic spectrum, they can be imaged separately in the microscope.

The team tagged Cdt1 with the reporter protein mKO2 to visualize G1 phase in orange, stem loop binding protein (SLBP) with mTurquoise2, an advanced cyan fluorescent protein, to light up cells in S phase, and linked Geminin to the reporter protein Clover, which was developed in Lin’s lab, to see G2 in green.

Lin and his team engineered a fourth reporter, mMaroon1, to emit light in the far-red region of the spectrum. They then tagged H1.0, a histone linker protein responsible for packing chromatin, with mMaroon1. Lin and his team called their four-phase cell-cycle reporter system FUCCI4.

Stefan Florian is a medical doctor-turned researcher in Tim Mitchison’s systems biology lab at Harvard who wanted to profile the cell cycle in tumors of live animals to learn how cancer cells react when a patient is treated with a drug.

“[IVM] is like a movie plus 3-D—you can see in real time what actually happens in the living organism,” said Florian.

To understand the dynamics of cell-cycle status in tumors, Florian’s team used two new reporters: one to visualize G1 and the other to see G2, S, and M phases.

“Because [FUCCI4] uses fluorescent colors with little overlap, it can be used with many microscopes, and it also has a clean reporter of S phase,” said Florian. “It is a welcome and very useful addition to our toolset.”

FUCCI4 hasn’t yet been used with IVM, but the reporter proteins might be bright enough and have the right wavelengths to penetrate living tissues. It should provide more detailed information about the cell cycle in vivo than before, he said.

According to Lin, FUCCI4 could also be useful in understanding physiology and development. “FUCCI4 is free from commercialization and patents. This is an open research tool for scientists and I’d encourage anyone who wants to use it to give it a try,” said Lin.

Imaging the effect of exercise on the developing brain