A new study examining the structure and biochemistry of butterfly ejaculate reveals the complexity of interactions between the sexes during reproduction. 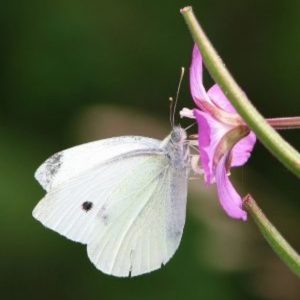 The textbook picture of sexual reproduction seems both simple and elegant: sperm meets egg, they form a zygote, and voila! They create new life. But scientists have known for a while that the closer you peer into this process, the messier and more mysterious the details become.

For example, male ejaculates often contain hundreds of components with unknown functions in addition to sperm. Now, a new study resulting from a unique collaborative effort between evolutionary ecologist Nathan Morehouse and systems biologist Nathan Clark and their teams at the University of Pittsburgh sheds more light on the evolutionary forces that shape this molecular complexity.

To study this question, the researchers turned to an organism that is a common sight in parks and gardens throughout the world—the cabbage white butterfly. Like many other insects, the males of this species pass sperm to the females in the form of a capsule called a spermatophore. The spermatophore contains sperm along with nutrients for the female, a “nuptial gift” that encourages the female to mate. The spermatophore consists of a hard outer envelope and a soft inner matrix, with a bolus of sperm at the base.

“I wanted to get a better understanding of what exactly males were transferring to females in these big spermatophore packages. It’s an enormous package—it’s 15% of the male body weight,” Morehouse said.

Morehouse began looking for collaborators with expertise in proteomics to aid in the study and was pleasantly surprised to find that Nathan Clark, a molecular biologist, was about to join the faculty of the University of Pittsburgh. The two researchers met for coffee, and an in-depth investigation into the composition of the butterfly ejaculate began.

Morehouse and Clark, along with their respective teams, characterized the molecular and biochemical composition of the outer envelope and inner matrix of the butterfly spermatophore and identified several key proteins that make up each of the structures. Interestingly, the two parts of the spermatophore had very different compositions and appeared to be produced in different parts of the male reproductive tract. The outer envelope, in particular, contained several proline-rich proteins, and was nearly indigestible.

Evolutionarily, males and females have opposing reproductive agendas. While females often try to maximize their resources in order to ensure survival for themselves and their offspring, males are more invested in fathering as many offspring as possible.

In butterflies, females can store sperm for long periods of time. Multiple matings give her more access to nutrients, so it is in the male’s best interest to delay her from re-mating for as long as possible, giving his sperm a greater chance to fertilize more eggs. The authors hypothesize that this indigestible envelope prevents the female from rapidly using the male-provided nutrients and subsequently mating with other males.

“It’s interesting to see that evolution has shaped the structural complexity in response to the functional need that the male has for how he interacts with the females,” said Morehouse.

“It’s like an arms race going on between males and females,” said Clark, “There’s both a cooperative aspect to their interaction, but there is also this kind of conflictive relationship as well.”

To support this view, the researchers also found evidence of rapid evolution rates in both male and female genes encoding spermatophore proteins.

“They’ve done a very, very careful study to look at each aspect in sequence, to really try to unravel how the spermatophore is being formed, where do these components come from, and how they act in concert, and also considering both the male and the female contribution,” said evolutionary biologist Nina Wedell, from the University of Exeter, who was not associated with this study. “There is also an underlying cooperative basis to mating. And I think it’s really nice that this paper emphasizes that, that this is not just conflict.”

Pair bonding could be the foundation of human social systems