Joseph Replogle, an MD-PhD student in Jonathan Weissman’s lab at the Whitehead Institute/MIT (MA, USA), explains how the technology he worked to develop – direct capture Perturb-seq – has revolutionized single-cell CRISPR screens, the applications of single-cell CRISPR screening he is most excited to see in the future and his top tips for any first time users.

How do you use single-cell CRISPR screens in your work?

Single-cell CRISPR screens are one of the primary tools used in my research. While the human genome was sequenced 20 years ago, we still don’t know the cellular function of most genes. CRISPR-Cas9 has been a revolutionary tool for biology by enabling us to knockout, knockdown, or activate genes in forward genetic screens. However, typical screens have a few major drawbacks. First, they focus on one-dimensional phenotypes (e.g. growth or marker gene expression). These simple phenotypes can conflate complex underlying mechanisms and limit hypothesis-free discovery. Second, they generally require very large numbers of cells, which biases research towards rapidly dividing cells. Single-cell CRISPR screens do not suffer from these drawbacks.

With single-cell CRISPR screens, my goal is to discover the function of many uncharacterized genes.

What problems have you addressed when developing direct capture Perturb-seq?

Single-cell CRISPR screens rely on introducing genetic changes into cells (generally using a lentivirus to deliver CRISPR guide RNAs) and then using single-cell RNA-sequencing (scRNA-seq) to simultaneously capture the genetic perturbation in each cell as well as the transcriptomic phenotype. Early single-cell CRISPR screen platforms suffered from one of two problems. They either:

(i) required lentivirus to be prepared in an arrayed format (i.e. one well per guide RNA in the screen) or,

(ii) were not compatible with studying genetic interactions, where a targeted set of multiple genetic perturbations were made in each cell.

In your work, how do you assess whether a research question is a good candidate for a single-cell CRISPR screen?

Assuming these criteria are met, a final question is whether there is likely to be complexity in the transcriptional response that could not be dissected with a simple, one-dimensional reporter. Oftentimes, this is a difficult question to answer a priori and I have been surprised many times. For instance, I was recently looking at hematopoietic differentiation, which I expected to be quite stereotyped, and I was surprised to see the number of non-canonical states that could be produced with genetic perturbations. My hope is that as we obtain larger Perturb-seq datasets, we can better define the areas where single-cell CRISPR screens are most useful.

CRISPR is a key element of many lab scientists’ toolkits. In addition to its application in basic research, CRISPR is also being applied as a diagnostic and therapeutic tool, and is generating invaluable insights for drug discovery.

In which disease or research field would you most like to see single-cell CRISPR screens applied and what makes you most excited about the potential impact in that field?

There are a few major areas where I think single-cell CRISPR screens are likely to make an important impact. For studying cancer, projects like the Cancer Dependency Map have generated a vast resource of genes that are preferentially essential in particular cancer cell lines. However, in most cases, the mechanism of preferential essentiality is unknown. Single-cell CRISPR screens are a great way to cluster genetic perturbations by phenotype, and thus, to understand how they affect cell growth. By understanding mechanisms, it should become easier to rationally target multiple genetic dependencies in cancer.

For studying post-mitotic, quiescent, or primary cell types, forward genetic screens have not been widely adopted. This is because many traditional forward genetic screens often require cell sorting or growth-based phenotypes, both of which may not be possible in many cell types. Also, traditional screens require millions of cells per experiment, and performing experiments at this scale is prohibitively expensive or challenging with many specialized cell types. Single-cell CRISPR screens can shift this balance by extracting considerably more information per cell. I hope this will bring the power of genetic screens to these extremely disease-relevant cell types.

What advice would you give to someone approaching a single-cell CRISPR screen for the first time and are there any important aspects you feel may be overlooked by first time users?

Single-cell CRISPR screens can be complicated to get started: they require optimization of a system for introducing genetic perturbations from cells, a protocol for preparing cells for scRNA-seq, and most importantly, an analytic pipeline for making sense of the data. It can take some time to work through all of these steps and pilot experiments are essential. I recommend reaching out to customer support at places like 10x Genomics – there is no reason to reinvent the wheel.

Finally, I would caution that single-cell transcriptional responses can be hard to interpret using simple tools like gene set enrichment. For this reason, it is always useful to have positive control genetic perturbations in experiments whenever possible.

What does the future hold for your work with single-cell CRISPR screens?

It has been incredible to watch the technology for performing single-cell CRISPR screens evolve during my PhD. In many ways, the technology has outpaced our ability to analyze the wealth of data obtained from these experiments. From a single experiment, you can learn about a cell type’s genetic dependencies and genetic regulatory networks. You can also explore an incredible breadth of phenotypes like differentiation, chromosomal instability, the cell cycle, retrovirus activation, alternative-polyadenylation, etc., not to mention the potential for combining scRNA-seq with other phenotypes like imaging or protein measurements.

With all this data, I expect that my future will be increasingly spent at the computer analyzing data, rather than at the bench! 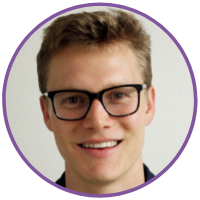 Joseph Replogle is an MD-PhD student in Jonathan Weissman’s lab at the Whitehead Institute/MIT working on single-cell CRISPR screens with the goal of bringing high-resolution functional genomics to diverse primary cell types.

Before medical school, Joseph worked in Philip De Jager and Barbara Stranger’s labs at Harvard Medical School and the Broad Institute (both MA, USA) studying the genetics of multiple sclerosis and Alzheimer’s disease. He received his undergraduate degree in Molecular Biology at Pomona College (CA, USA).

This feature was produced in association with 10x Genomics. The opinions expressed are those of the interviewee and do not necessarily reflect the views of BioTechniques or Future Science Group.