Researchers reveal how specific mutations in dogs’ genetic architecture are responsible for their distinctive, over-friendly behavior. What can this tell us about human socialization? 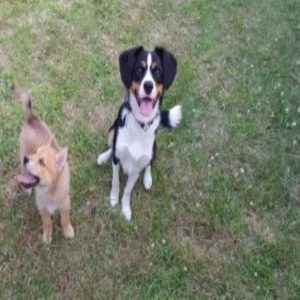 There’s no other animal quite like a dog. It’s hard to believe that these furry friends with their wagging tails and playful natures belong to the same family as snarling, howling wolves. Now a new study published in Science Advances reveals an underlying genetic basis for dogs’ uniquely attuned hyper-social behavior—and a similar genetic architecture in humans (1).

The canine relationship with humans has changed quite drastically over the years, from hunting, protecting, and herding, to walking, cuddling, and playing. Our current relationship began in the Victorian era, when people started breeding dogs for the distinct characteristics and appearances we see today. Soon, different dog personalities began to emerge, raising curiosity and interest in many researchers. Fast forward a century to the early 2000s when the Canine Genome Sequencing Project was released, offering scientists key information about the structure and evolution of genes and genomes.

“My original interests were in conservation genetics, with a focus on the reintroduced and recovering gray wolves of the North American Rocky Mountains,” said Bridgett vonHoldt from Princeton University, who led the new study. “At the time I started my dissertation, the dog genome became publically available and as a result, I could broaden my scope to ask deeper questions about canine evolution.”

In 2010, vonHoldt found that gray wolves from the Middle East were the predominant source of dogs’ genetic diversity (2). From that study, “WBSCR17 was one of the most intriguing findings–a gene with a fairly undescribed role in human Williams-Beuren Syndrome (WBS),” said vonHoldt. WBSCR17 differed significantly between dogs and wolves and associated with hyper sociability and development delays in domesticated dogs.

To explore the underlying genetics of the behavior differences between wolves and dogs, vonHoldt measured human-directed sociability in 18 dogs and 10 wolves, focusing on attentional bias to social stimulus, hyper sociability, and social interest in strangers. Domesticated dogs spent more time gazing at their owners and searching for them if they left the rooms than solving puzzles, which was consistent with an attentional bias to social stimulus. In addition, the dogs also spent longer times in close proximity to humans–familiar and strangers –than the wolves.

The team next sequenced DNA from blood samples from each of the animals and searched for structural variants in the WBSCR17 gene and its surrounding region on the chromosome using three independent algorithms. In total, four structural variants significantly associated with human-directed social behavior in dogs, with two lying within WBSCR17. The other two lay within genes encoding transcription factors known to confer hyper sociability in humans with WBS . The researchers confirmed the structural variants using PCR. “The paper is among the few that identify possible genetic mutations associated with behavioral differences relevant to domestication in canines,” said vonHoldt. “Lifetime experience and genetics are both important to the development of social behavior. Compared to wolves, dogs display a greater tendency towards human-directed hyper social behavior that may contribute to their success in human environments and may make them appear more lovable or less threatening.”

Although they focus mainly on dogs, vonHoldt and her team are exploring many avenues with this data and working on learning more about the functional impact of these mutations on gene expression. “I would be very excited if someone wanted to sequence this region in the domesticated cat,” laughed vonHoldt. “I think that would answer so many questions about domestic species!”