From the effects of playing the didgeridoo on sleep to the best way to carry a coffee cup, the Ig Nobel Prize 2017 ceremony celebrated decidedly absurd research in a decidedly absurd manner. 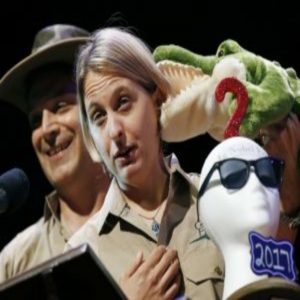 The Ig Nobel Prize 2017 in Economics winners with their prize.

The Ig Nobel Prize 2017 ceremony, held on September 14th, began with a flurry of paper airplanes launched toward the stage at Harvard University’s Sanders Theater. The ensuing hour of absurdity included a performance of “The Incompetence Opera,” live demonstrations of scientific concepts (some more successful than others), a human NSFW monitor, and the awarding of the ultimate prize for weird science.

The Ig Nobel Peace Prize was awarded to researchers from Switzerland for furthering peaceful relaxation by showing that playing the didgeridoo relieves sleep apnea and snoring. Author Alex Suarez, a didgeridoo instructor, was the first patient to try this therapy, which was further validated by a randomized, controlled trial of 25 patients. The effects on innocent bystanders who had to listen to the didgeridoo were not assessed.

Researchers from Australia, the actual home of the didgeridoo, were awarded the Ig Nobel Prize 2017 in Economics for showing that holding a 1-meter-long crocodile influences subsequent gambling behavior. Individuals at risk of developing a gambling problem placed higher bets after handling a crocodile compared to controls, but only if they had few negative emotions. The opposite effect was seen for at-risk individuals with many negative emotions. The long-term psychological effects of holding a toothy carnivore were not determined.

The Ig Nobel Prize 2017 in Physics was awarded to Marc-Antoine Fardin of Lyon, France, who felt that the question, “Can a Cat Be Both a Solid and a Liquid?” needed an answer. He turned to the field of rheology, using a theoretical framework for modeling the flow and deformation of matter to determine that cats can assume solid, liquid, or even gaseous states. Said cats everywhere: “What are you looking at, human?”

Showing that the prize categories can be, well, rather fluid, the Ig Nobel Prize 2017 in Fluid Dynamics was awarded to Jiwon Han from South Korea, for his investigation of coffee spilling phenomena. By studying the oscillations of coffee in a cup under movement, Han, then a high school student, determined that spillage could be prevented either by walking backward (which he deemed impractical) or by holding the coffee cup from above with a claw-like grip. Alternatively, you could just put a lid on it.

For their study of much less appetizing drinking behavior, researchers from Brazil won the Ig Nobel Prize 2017 in Nutrition for the first report of human blood in the hairy-legged vampire bat’s diet. Using PCR amplification, the authors detected human DNA fragments in the feces of cave-dwelling vampire bats. The bats’ victims have yet to be identified.

Apparently unaware of the risk of being attacked by blood-sucking bats, the winners of the Ig Nobel Prize 2017 in Biology, who couldn’t attend the ceremony, filmed their acceptance speech in a cave. These researchers won for their discovery of a cave insect genus native to Brazil whose females have an “elaborate penis-like organ” and males have an internal vagina-like “genital pouch.” For the potentially NSFW details, read the paper.

Not to be outdone by the etymologists in picking uncomfortable research topics, scientists from Spain won the Ig Nobel Prize 2017 in Obstetrics by demonstrating that human fetuses responded more strongly to music played through the Babypod—an FDA-approved, patented, intravaginal speaker—than to music played through headphones placed around the mother’s abdomen. The researchers observed responses from fetuses as young as 16 weeks gestation, contrary to the previous belief that functional hearing doesn’t develop until 20 weeks gestation. For expectant parents who want to get a head start on their child’s musical education, the Babypod is available for purchase.

The Ig Nobel Prize 2017 in Anatomy was awarded to James Heathcote of the UK for a study of body parts that are actually safe to view at the office. In an article titled “Why Do Old Men Have Big Ears?” he analyzed ear length versus age for 206 patients ranging in age from 30 to 93 years, Heathcote concluded that the human ear grows 0.22 mm per year. Hey, Grandpa! Guess what I learned in school today?

Physical appearance—along with self-image—was also of interest to a group of Italian researchers who took home the Ig Nobel Prize 2017 in Cognition for a study demonstrating that identical twins often cannot tell each other apart in photos. Sometimes knowing yourself is harder than you would think.

Finally, the Ig Nobel Prize 2017 in Medicine was awarded for a more high-tech study by researchers based in France and the UK who used fMRI to identify the brain structures responsible for finding cheese disgusting. But was it all types of cheese, or just the stinky kind?

In addition to world-wide recognition, the winners received a certificate signed by an actual Nobel Prize laureate, a 10-trillion-dollar bill (Zimbabwean dollars, now worth $0 USD due to abolishment of the currency), and a mannequin’s head with a question mark stuck on top. We can’t wait to see which offbeat research developments will be deemed worthy of next year’s Ig Nobel Prizes.

The 2021 Ig Nobel Prizes: the lighter side of science