For the last year and a half, science has been very serious. There’s nothing quite like a global pandemic and rapidly advancing climate crisis to suck the fun out of studies and, while this research is critical, science is in dire need of an injection of silly to balance things out.

So, it is with great joy that we can finally reveal to you the winners from the 2021 Ig Nobel Prize seremony: the awards for “achievements that first make people laugh and then make them think,” as Improbable Science, the hosts of the award put it. Read on to discover one of the therapeutic effects of an orgasm, which way up you should transport your rhinos, why men may have punched beards into existence and much more!

Has the cat got your tongue?

Susanne Schötz, Joost van de Weijer (both Lund University, Sweden) and Robert Eklund (Linköping University, Sweeden) won the biology prize for a series of 5 papers. These studies logged the differences in the acoustic variations in purring between four different domesticated cats and explored the variations in feline vocalization further, before producing a preliminary taxonomy of the vocalizations of cats observing prey through a window.

After identifying the real-life tones that Sylvester may have been muttering to Tweety Bird, the researchers were able to show that the vocalizations of cats in different situations could be identified by humans. When played 12 recordings of cats meowing while either waiting for food or waiting for the vet, humans were significantly better than chance at determining which predicament each mog was in. This suggests there may be more to human–cat communication (charmingly named “meowsic” by the researchers) than you might think.

Detection and clearance of mines often involves humans being close to the mines and, therefore, carries significant risks. But what if we could get nature to do some of the dangerous work for us?

The team found that for people with nasal obstructions, nasal breathing was improved by the same amount post climax as it was by the application of nasal decongestants. These results could prove welcome for the tissue industry, which may now benefit two-fold from those suffering with colds. 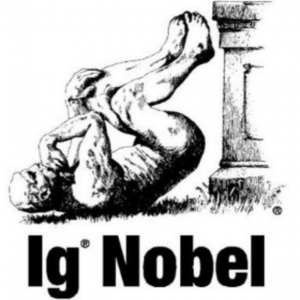 Check out the winners of last year’s Ig Nobel prize, From a new medical condition to narcissists and hitmen.

The ecology prize winners, Leila Satari, Alba Guillén, Àngela Vidal-Verdú, and Manuel Porcar (all the University of Valencia, Spain), examined the bacteriome of chewing gum discarded and stuck to pavements. The team characterized the typical composition of the chewing gum bacteriome and plotted its development from the oral microbiota introduced to the gum during chewing.

An international team of researchers, primarily populated by researchers at the Max-Planck Institute (Mainz, Germany) were awarded the chemistry prize for their examination of the volatile organic compound (VOC) composition in the air of movie theatres to determine the level of violence, sex, drug use and bad language contained in the film being watched.

As the extent and composition of VOCs expelled through breathing and skin are known to be impacted by emotions, the team believed they could be used to establish a more objective measure for grading the age certificate of films. While VOCs weren’t able to reliably predict all classifiers, one – isoprene – was able to predict the 0, 6 and 12 age classifications for a range of film categories and audiences.

This Halloween we take a look at the science of scary music. What makes us shiver, gasp and our hairs stand on end?

Reading cooked books by their cover

The economics prize was presented to Pavlo Blavatskyy (Montpellier Business School, France) for their discovery that corruption in a countries’ government could be predicted by measuring the average Body Mass Index of its politicians.

Using a computer visualization algorithm to estimate the BMI of 299 cabinet ministers from 15 post-Soviet Union states, Blavatskyy compared this with data from the Transparency International Corruption Perceptions Index, World Bank Worldwide Governance Indicator, Control of Corruption, and the Index of Public Integrity. This analysis revealed a strong positive correlation between the two.

Cushioning the blow of masculinity

Ethan Beseris, Steven Naleway, and David Carrier (all the University of Utah, UT, USA) took home the Peace Prize for testing the hypothesis that men evolved beards to lessen the force of a blow to the face.

To test the theory the team wrapped a proxy bone with sheepskin that had either been sheared or left covered with thick hair. By dropping a weight onto the model, they established that the energy absorbed was 37% greater on the furry vs the sheared model, suggesting that a beard could indeed help protect the face from a blunt force. However, research is yet to establish whether the protective benefits of a beard could be diminished by an increased frequency of receiving blunt force facial trauma…

The physics and kinetics prizes were awarded for two opposing studies that explored how pedestrians on busy pathways consistently avoid bumping into each other, and why they sometimes fail in this endeavor and collide.

The transportation prize was awarded to a team of researchers who revealed that, when transporting a darted black rhino through the air, dangling below a moving helicopter, it was safer for the rhino if it was oriented upside down: a conclusion that one must imagine the (fortunately comatose) rhino would have difficulty agreeing with as it is hoisted into the air by its ankles.

The Ig Nobel Prize 2017 Winners: weird science gets its due