How has science fared in the first 100 days of Trump’s presidency? 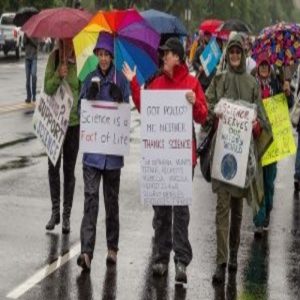 April 29th marked Donald Trump’s 100th day in office, and conversations now swirl around how the new Republican administration’s endeavors have fared so far. In January we speculated on the future of science under a Trump presidency based on appointments and claims that he and his campaign had made. Now, progress in establishing a cabinet and recent steps to put a budget in place offer a clearer picture of what to expect.

For researchers in the lab, funding is perhaps the most pressing concern when considering government involvement in science. In mid-March, the White House released a budget blueprint for government spending and unfortunately, science appeared slated for the short end of the stick. The proposal called for an 18% cut to the National Institutes of Health (NIH), a 31% cut to the Environmental Protection Agency (EPA), and a 5.6% cut from the Department of Energy (DOE), with a further 20% cut to the agency’s Office of Science, which funds research on wide-ranging topics like climate change and the Human Genome Project. However, while cuts within the DOE target renewable energy initiatives, nuclear weapons spending was set to receive a boost.

In comparison, NASA appeared to be weathering the storm with a mere 1% proposed cut. The National Science Foundation (NSF), a major financer of fundamental research and education, was inexplicably excluded from the budget proposal.

Michael Lubell, professor of physics at The City College of New York and a former lobbyist with the American Physical Society cautions that these budget plans should be taken with a grain of salt. “Will Congress accept these numbers? No. His skinny budget is dead on arrival,” he said. Proposing to under fund areas like science and technology—which both parties in Congress want to fund–is a common bargaining tactic used to appear fiscally responsible overall, while still over-funding areas of interest, such as military spending.

Early signs are emerging that Lubell’s prediction is likely to come true. This past weekend, the Republican controlled Congress announced an omnibus agreement that included a $2 billion increase to the NIH’s 2017 budget. Although this does not directly address the new administration’s 2018 budget proposal, it does shed some light on Congress’ willingness to fight back on this issue. In fact, a number of Republican members of Congress, including Senators Roy Blunt, Tom Cole, and Lamar Alexander, are strong advocates of research spending.

The influence of these advocates with meld with the science-related advisors appointed prior to Trump’s inauguration, including Scott Pruitt to head the EPA and Rick Perry as Energy Secretary. Unfortunately, as of now, the position of director for the Office of Science and Technology Policy (OSTP), a position that has served as an informal science advisor to recent presidents, remains vacant. Lubell noted that while science and technology might not necessarily spearhead a particular decision, the president can choose to have it shape the decision making process. “If he doesn’t have that, his decision on anything is going to be shaped by other considerations to the exclusion of science and technology,” he said.

The lull in the Republican administration’s science appointments and the proposed budget cuts for key agencies leaves science advocates worried about the future of science in the U.S. This past Earth Day, thousands descended on Washington, D.C. for the March for Science to show support for evidence-based policymaking and scientific research.

Meanwhile, the omnibus agreement offers evidence that congress considers and supports ongoing research. And on the day of the science march, Trump said, “Rigorous science is critical to my Administration’s efforts to achieve the twin goals of economic growth and environmental protection.”

While the ongoing dialogue among scientists is consumed by the perceived attack on science by the current administration, it is critical that scientists remember that the majority of Americans support science. A sustained effort to further cultivate this support is in the interest of scientists. The data suggest a need to rebrand efforts away from a need to educate the public and towards a need to collaborate with the public.