Sympathy for the Devils - BioTechniques

Sympathy for the devils

The Tasmanian devil is endangered by a bizarre transmissible cancer, but scientists and the devils themselves are fighting back. 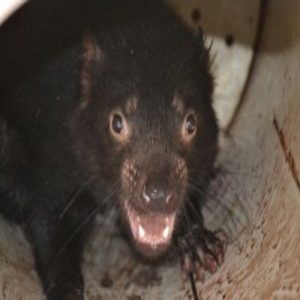 It all started with a single Tasmanian devil. One of her Schwann cells, which produce sheaths to protect neuronal projections, turned cancerous. That devil likely died long ago, but her cancer jumped to another animal. And another. Her cells now live on in an unusual, contagious cancer that has decimated the devil population. But there’s hope for Tasmanian devils. Researchers recently reported preliminary success with immunotherapy against the cancer in Scientific Reports (1). Moreover, there’s evidence hinting that wild devils may be adapting to the cancer; a handful even seem to mount their own immune responses (2).

Tasmanian devils are the largest marsupial carnivores in existence. Their black coats, screeches, and tooth-baring gapes earned them the moniker “devil,” and it didn’t help their reputation that they emit a foul aroma when stressed. But they’re also “unique and iconic,” said Elizabeth Murchison, a Tasmania native and cancer biologist at the University of Cambridge. The devils are important players in the Tasmanian ecosystem, scavenging to keep the environment clean and prevent the spread of disease. If they disappear, other introduced predators such as feral cats are likely to upend the ecosystem’s balance.

The Australian island state of Tasmania is no stranger to extinction; it lost its eponymous tiger in 1936. “It’s something we don’t want to happen again,” said Greg Woods, an immunologist at the University of Tasmania.

Tasmania formally listed the devil as endangered in 2008; some estimates predict extinction for the wild devil population within decades. More than 80% have died since the cancer, called devil facial tumor disease or DFTD, was first spotted in 1996. It spreads when the animals bite each other’s faces during feeding or mating, grows into gruesome facial tumors, and metastasizes throughout the body, killing within months. In 2014, scientists discovered a new contagious facial cancer in Tasmanian devils, this time originating from a male (3). The two cancers are now called DFT1 and DFT2.

Cancer is not normally contagious; the immune system should attack cells from another animal, as it does during organ transplant rejection. Scientists only know of one other case of contagious cancer, a sexually transmitted disease in dogs. The origin of canine transmissible venereal tumor (CTVT) is ancient, derived from a dog that lived about 11,000 years ago. There are also a handful of transmissible cancers in shellfish.

“In the space of a few years we’ve gone from knowing about two transmissible cancers to knowing about eight,” said Murchison. “[DFT2] suggests that there’s something about Tasmanian devils that makes them vulnerable to this kind of disease.” There could be several reasons for that, she speculated. Their biting habits make the disease easier to transmit, and this island population lacks genetic diversity, potentially making it easier for one devil’s cells to go unmolested in another.

Though it’s only been present for a couple of decades, DFTD already seems to be influencing devil evolution. Murchison and colleagues compared genetic markers from different populations of devils before and after DFTD hit their home ranges and found two genetic regions that seemed to change in similar ways in different devil groups affected by DFTD (4). Those regions contain seven genes with human homologs involved in immunity or cancer risk. It suggests that the devils are adapting to the cancer, said Murchison—though she cautioned that in a small population, random genetic drift might create similar genomic changes.

In 2013, Woods and colleagues discovered that the cancer cells don’t express MHC molecules, the cell surface flags that would normally mark them as foreign (5). “They’re effectively invisible,” Woods said.

That discovery gave the researchers an idea. MHC genes are still present in cancer cells; they’re just shut off. If they could turn the MHC genes back on, they reasoned, they ought to be able to kick-start an immune response.

Studies of wild devils gave them another hint that the devil immune system is not utterly helpless against DFTD. Woods’ collaborators trap devils every 3 months, assess them, and release them again. Over a 12-month period, they discovered 5 devils that had a small facial tumor disappear. Several devils also produced antibodies against DFTD cells, they reported in 2016 (2).

“This paper suggested for the first time that some devils are able to fight it off,” commented Murchison. “But I don’t think we can rely on the devils fighting off the disease themselves, and I think there really is a need for a vaccine.”

Woods and colleagues want to activate the devil immune response with a treatment based on the cancer cells themselves. To induce DFT1 cells in the lab to express MHC, the researchers cultured them with interferon-gamma, an immune signaling molecule. Then, they used these cells, either live and whole or dead and homogenized, to create vaccines and treatments for nine captive-bred devils. They could only use these few experimental subjects, so they sometimes tried several treatments in the same individual.

Early experiments with vaccines based on dead cells sometimes produced an immune response in the form of antibodies against the cancer, he said. When they challenged the vaccinated animals with normal living tumor cells, one devil seemed to be protected, though it was getting old and died soon after.

Then, the researchers tried live MHC-expressing cells as immunotherapy in the devils that had been vaccinated and infected with the cancer. In three devils, tumors the size of golf balls shrank and disappeared (1).

The advantage of the live cells is that they induce the immune system to attack cells with foreign markers on their surfaces, said Woods. The worry, however, is that the treatment might simply transmit the cancer instead of warding it off. The researchers are now trying to develop an attenuated DFT1 strain that would require artificial growth factors and thus be unable to survive for more than a short time once injected. It would last just long enough to jump-start immune action against the cancer.

The treatment seems to work best as a one-two punch, with the dead-cell vaccine to prime the immune system and the live cells to promote the response. The effect might last for about a year before wearing off, Woods supposed, and would not be passed on to offspring. And that’s just for the original devil tumor; researchers don’t yet know how far DFT2 has spread or if the same strategy would work for that cancer.

A multi-shot treatment would be too difficult to enact in the wild devil population. However, the Tasmanian government has set up DFTD-free “insurance” populations, on isolated islands and in zoos. Those are the devils Woods hopes to eventually vaccinate and release back into the wild.

“If we can release enough healthy devils, it might be enough to prevent disease transmission,” he speculated. “At least, we can protect them for 12 months; that sort of breaks the cycle.”