How natural killer cells fight cancer? Tumors produce a multitude of growth factors that favor their own growth while suppressing the immune system. What if one of these factors could both activate the immune system and kill cancer cells? 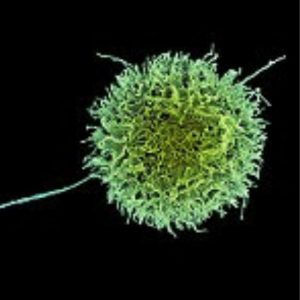 When we think about the immune system, we often think about the adaptive arm of immunity, which relies on activated T-and B-cells, rather than innate immunity, which protects us from foreign material without prior exposure. Natural Killer (NK) cells are involved in innate immunity since they do not need prior sensitization or antigen exposure to activate killing, but how these cells recognize harmful material isn’t entirely clear. A new study by Marco Colonna at Washington University School of Medicine in St. Louis reports that NK cells initiate an anti-tumor response after its receptors are bound by a key growth factor produced by tumor cells.

“The question for many years is how NK cells recognize tumor cells,” said Colonna. Some receptors on NK cells, such as NKp44, contribute to tumor recognition and killing. “The [NKp44] receptor was cloned in 1998. For about 20 years it’s been around, but no one knows the ligand recognized by this receptor on tumor cells.”

Colonna and his team set out to find that ligand using the secretome library from Novartis, which comprises every transmembrane protein and secreted protein in the genome, expressed as soluble proteins, combined with a reporter NK cell line that expresses GFP when the NKp44 receptor is engaged by a ligand. They found that platelet-derived growth factor D (PDGF-D, homodimer PDGF-DD), a soluble protein in the PDGF-family of growth factors, bound NKp44 with high affinity. This family of growth factors is known to engage receptors on tumor cells, and contribute towards pro-tumor activities.

“We were very surprised since most NK cell receptors recognize cell surface molecules that are membrane bound. But in this case, it is a secreted protein,” said Colonna. A further surprise came when the team realized that PDGF-DD is the only PDGF family member recognized by this receptor.

After successful in-vitro experiments, the researchers moved in vivo, which proved to be cumbersome since mice do not express NKp44, eliminating the possibility of using a knock-out model. Instead, they tried generating a humanized mouse model by taking immunodeficient mice and injecting them with human NK cells. “This was very challenging and difficult and at the end of the day we had to abandon it because the constitution of mice with human cells was very variable from mouse to mouse,” said Colonna.

Success finally came when post-doctoral fellow Alexander Barrow created a transgenic mouse model that expressed NKp44 with the same tissue pattern as humans. When injected with a melanoma cell line that was transfected with PGDF-DD, the researchers saw increased NK cell killing of tumors in the mice.

Colonna wanted to see which human tumors were more likely to respond to NKp44 induced killing. To do so, he searched The Cancer Genome Atlas (TCGA) for the top 8 cytokines released by NK cells in response to PDGF-DD binding. “The question was, ‘where can we find this particular NK cell signature?’ And we found that this signature was really strong in glioblastoma tumors,” said Colonna. “We now have a better understanding of how NK cells recognize tumors.”

Colonna believes that targeted glioblastoma therapy is possible, but rather than targeting PDGF-DD, it would be better to target the receptor on tumor cells that binds PDGF-DD, transforming growth factor receptor (TGFBR), which is responsible for the pro-tumor activities.