A coordinated attack: how bacteria fight

Colonies of bacteria fight one another using specialized toxins that affect different species within the microbiome. Now, new research sheds light on how these organisms battle. 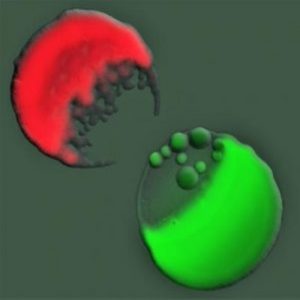 The human microbiome is home to an estimated 100 trillion bacteria—a dense and diverse community made up of many different strains and species. Like any other organisms living within a constrained area, bacteria must compete with one another for resources. As such, bacterial species over time have developed sophisticated ways to fight off other microbes using the regulated release of toxins. Such bacterial competition is important for understanding how bacteria survive and thrive in different environments.

“There’s been a lot of work asking what causes bacteria to release a given toxin—that is, how do they regulate toxin release. But this is normally phrased in terms of molecular pathways rather than studying how bacteria actually behave when they are fighting with another strain,” said Kevin Foster, an evolutionary biologist at the University of Oxford. “We wanted to know how different Escherichia coli strains behave during combat.”

To find out, Foster and his colleagues introduced green fluorescent protein into different strains of E. coli at certain promoters. “This made them go green when they were behaving aggressively, which allowed us to follow their behavior at the level of single cells and as a whole group,” Foster explained. “We then fought pairs of strains side by side on agar to watch what they did.”

The team discovered that different strains of E. coli, despite being the same species and using the same molecular pathways to regulate toxin release, showed a wide variety of combat behavior. Foster said they were surprised to see just how different the levels of aggression were between strains—and how the different strains responded to attack.

“We were particularly amazed by the ability of some strains not only to detect an incoming attack but pass on this information to other cells in the group, resulting in a massive coordinated attack in response to a competitor,” he said. “When a cell of one strain detects an incoming toxin that could harm it, it starts to make its toxin in return to target its competitor. But the cells surrounding it, members of the same strain, can detect the toxin made by their ally even though it doesn’t harm them and then they activate toxin production, even though they didn’t detect the incoming attack themselves. In short, one cell can tell the others it is under attack and recruit them to fight.”

Foster hopes to follow up on this study by investigating the competitive nature of other bacterial strains and expects to see even more diversity in battle tactics. He believes that this work will offer a better understanding of what allows both probiotic and pathogenic species to “invade and persist” in the human gut.

“In doing so, we can help both to prevent invading pathogens that cause disease as well as bolster probiotic species that protect us and provide other health benefits,” he said.