A new study suggests a novel mechanism of how DNA helps shape cells. 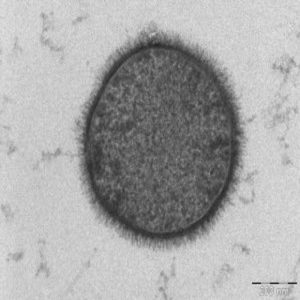 In bacteria, morphology depends on the peptidoglycan (PG) cell wall, but scientists still do not understand how the wall interacts with other cellular components to determine cell shape. In a study recently published in Cell, researchers suggest that turgor pressure caused by DNA influences cell morphology during Bacillus subtilis sporulation.

“Usually scientists, when they are studying morphology in bacterial cells, will look to the outside of the cells, so things like the exoskeleton, like the cell wall,” explained Kumaran Ramamurthi at the National Cancer Institute who was not involved in this study. “But with this study, what they did is suggest there are forces inside the cell that can contribute to the shape of this very specialized cell type.

Co-first author Nikola Ojkic from Imperial College London explained that he hypothesized that perhaps pressure played a role in cellular morphological changes. Hoping to study engulfment and the sporulation system, he became interested in Kit Pogliano’s research at the University of California, San Diego and eventually reached out to collaborate.

“For the model to work, [Ojkic] needed increased pressure in the forespore. We didn’t know how this happened. One possibility was DNA, and we started doing experiments from there,” said co-author Javier Lopez-Garrido from the University of California, San Diego.

The scientists stained the B. subtilis membrane and used time lapse fluorescence microscopy to observe how forespore shape changed. Its volume increased during engulfment, while the mother cell’s volume declined and surface area increased. When the team looked at bacteria with a point mutation in a protein critical for DNA translocation, the membrane bunched around the forespore and prevented its growth into an ovoid. However inhibiting PG cell wall synthesis with inhibitors did not affect forespore growth. Those results suggested that DNA translocation was critical for the forespore to grow into an ovoid.

The researchers next wondered if the DNA promoted an increase in growth-related gene expression, or if the physical chromosome packing itself affected forespore growth. When the team genetically manipulated the chromosomes to translocate back out of the forespore, they observed that the growing forespore collapsed. Conversely, blocking protein synthesis in the forespore did not affect cell growth. Those two observations indicated that the growth of the forespore was a physical consequence of packing the chromosome in this small cell, and that gene expression was dispensable.

Using cyro-electron tomography, the team better visualized the effect of chromosome translocation on forespore morphology. This method allowed the researchers to see the cellular structures in their natural state with molecular resolution.

For years, the Pogliano lab observed small spores resulting from inhibited chromosome translocation. However, Lopez-Garrido explained they never expected the mechanism to involve pressure caused by the presence of DNA.

“Now if you look back to those images, it is kind of obvious. If you have more DNA, the spores look bigger and inflated,” added Ojkic.

The scientists then developed a mathematical model that accounts for the interaction between cell wall synthesis, degradation, and the pressure difference between forespore and mother cell. Simulations using different pressures correlated with the experimental data. Finally, the team used different Bacillus species and observed that the model accurately predicted forespore growth.

“Now we have a system in which [DNA created pressure] has implications for the cell itself, on the cell shape, on the architecture,” Lopez-Garrido explained. “Then the next question is, ‘Is it important in other systems?’ The answer is we don’t know. We don’t know yet. But it might.”

Shining a light on swimming bacteria