When starved of protein, fruit flies chow down on more of the nutrient. But certain microbial species can stop them from doing so—with no apparent ill-effects. 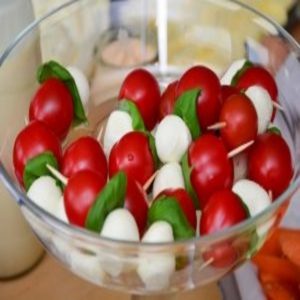 Fruit flies’ food cravings are simple: they seek out sugary foods for an energy boost, while protein-rich meals help them produce eggs and live longer. But now, researchers report that gut microbes can tweak these food choices as certain bacteria suppress flies’ appetite for protein even if their diet lacks essential amino acids. The results, published in PLOS Biology, are the first to suggest that the gut microbiome can alter food choices in this model animal (1).

In humans, fruit flies (Drosophila melanogaster), and other animals, a protein-rich diet is important for fertility, lifespan, and other measures of health. Adult fruit flies develop a strong taste for protein when yeast—their main source of the nutrient—is removed from their diets. But because yeast is a complex mix of amino acids, carbohydrates, and other molecules, it’s difficult to determine how flies sense and regulate their intake of this protein-rich food or what role gut microbes play in this process.

“Since the microbiome is such an important part of many animals, and it’s been related to metabolic diseases, we thought there might be an interaction between the type of microbiome an animal has and how it responds to nutrients,” said Zita Carvalho-Santos, a postdoctoral researcher at the Champalimaud Centre for the Unknown in Portugal, and author of the new study.

To figure out how flies know when they need protein, Carvalho-Santos and her colleagues turned to a synthetic fly diet that can be easily tweaked. They found that when they deprived flies with few gut microbes of any one of 10 essential amino acids—the ones that a fly’s cells cannot synthesize—and then offered the flies a choice of either sugar or yeast extract, they chose to increase their consumption of yeast.

But restoring just two species normally present in flies— Acetobacter pomorum and either Lactobacillus plantarum or Lactobacillus brevis—eliminated this craving. Flies that carried these microbes did not switch to high-protein foods, even if their food lacked essential amino acids. Non-essential amino acids, which flies can synthesize from dietary components, did not influence food choice behaviors. Furthermore, the missing nutrients had no apparent effect on bacteria-bearing flies’ egg-laying abilities.

Many studies in humans and mice have shown that gut bacteria can influence an animal’s overall food consumption. But few have looked at how microbes can alter the intake of specific nutrients.

“What’s cool about this work is that they were able to show how specific gut bacteria in flies can have a causal effect on the fly’s intake of nutrients,” said Adam Wong of the University of Florida in Gainesville, who was not involved with the study. “It’s especially exciting because they were able to tease apart how the preference for specific nutritional components in diet—which is protein in this case—is affected by microbes.”

A wealth of data supports the idea that the gut microbiome can profoundly influence nutrition, health, and behavior. For example, the gut microbiome of obese individuals is known to be different from that of their lean twins. Malnourished children have microbiomes distinct from those of well-fed counterparts. And studies in humans and mice have found links between gut bacteria and neurodevelopment, social behaviors and anxiety. But because the microbiomes of humans and rodents include hundreds of species, establishing a clear causal link between gut bacteria and different conditions has been a challenge.

“Mammalian microbiomes are incredibly complex, so they’re very difficult to manipulate” said Carvalho-Santos. “The power of using Drosophila is that its microbiome is much simpler. With a very small set of just five different species of microbes, we see a striking difference in food choice behavior.”

Precisely how these microbes might make up for the missing nutrients is still a mystery. The researchers found that the bacteria did not produce detectable quantities of the required amino acids. The bacteria also did not appear to change essential amino acid levels in the flies’ heads, suggesting that the changed behavior was not due to the presence or absence of brain signals triggered by these chemicals.

The results may appear counterintuitive at first, Carvalho-Santos said. Since the bacteria don’t seem to be replacing the essential amino acids, is the fly starved of necessary nutrients?

One possibility is that the bacteria may enable the fly “to access available nutrients in a more efficient way,” she added. “If you imagine a fly in the wild…when it’s in a sub-optimal environment where not all amino acids are present, the bacteria will effectively help the fly to sustain its fitness until it can get to a type of food that allows it to replenish the missing amino acids.”

Until now, little was known about why flies seek one kind of food over another at certain times, such as mating. By using a synthetic diet and a limited microbiome, this study is the first to show how nutrient availability and gut bacteria can influence food-seeking behaviors.

In addition to gut microbes, host factors also matter. Another recent study, published by researchers at Johns Hopkins University, found that fruit fly brains carry a dopamine circuit that is activated by protein starvation. Once triggered, these neurons promote protein rather than sugar consumption (2). Understanding how gut microbes, neural mechanisms, and other factors interact in simplified models is crucial to discovering how the microbiome can influence behavior in more complex situations.

“Broadening this into ecological contexts is the next step,” said Nichole Broderick of the University of Connecticut, who was not involved with the study. “Whether in flies or in humans, one of the more intriguing aspects of microbiome research is the idea that microbes can amend, ameliorate or drive some behaviors. This study is a great example of the types of detail we can discover with fruit fly experiments.”