Can mold weaken your immune system?

How can the common fungus that appears everywhere – otherwise known as Aspergillus fumigatus – weaken the immune system’s defenses and be life-threatening for those who are immunosuppressed? 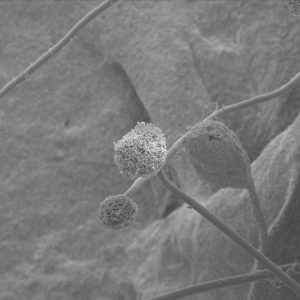 What is mold? Mold is a fungus. The term ‘mold’ refers to many different species of fungi that grow in multicellular branches called hyphae. This network, that often appears discolored and fuzzy, is considered to be a single organism. Fungi that grow as single cells are referred to as yeasts.

Is mold dangerous? Different types of mold can have different effects on humans. When breathed in, some types of mold can make you sick. For those who are immunosuppressed and have weaker immune systems, the effects of breathing in mold can be much worse and can potentially lead to death.

The fungus Aspergillus fumigatus – also known as the dark gray mold that grows anywhere with spores that cling to wallpaper, floors and even mattresses – can cause major problems for those who are immunosuppressed. However, the mechanism by which it works was shrouded in mystery, at least until now.

An international team of researchers led by Oliver Werz (Friedrich Schiller University; Jena, Germany) has discovered just how this fungus, whose spores are not a problem for healthy people, can be life-threatening for those with a compromised immune system, for example as caused by a disease such as AIDS.

One of the key elements of its pathogenicity is a potent mycotoxin named gliotoxin. The researchers utilized synthetically produced gliotoxin; introducing it to neutrophilic granulocytes – immune cells that represent the first line of immune system defense. “Their task is to detect pathogens and eliminate them,” explained Werz.

When a pathogen is introduced, these cells should release messenger signals (leukotrienes) into the blood to attract more immune cells, which would accumulate and ensure the pathogen is disarmed. However, when the pathogen is A. fumigatus, this does not happen. As the researchers were able to demonstrate, gliotoxin inhibits production of the messenger leukotriene B4 in neutrophilic granulocytes by switching off the enzyme LTA4 hydrolase.

“This interrupts communication between the immune cells and destroys the defense mechanism. As a result, it is easy for spores – in this case the fungus – that enter the organism to infiltrate tissues or organs,” commented Werz.