Bacteria are notorious for forming biofilms even under challenging conditions, but exactly how they initiate this process remains elusive. Now, two independent studies show that pili and flagella may play a crucial role. 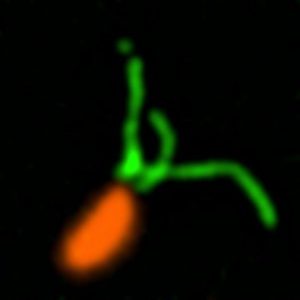 In a dark room, you might stretch out your arm to sense obstructions. When your finger touches a surface, a series of internal reactions fire an electrical signal to convey the perception of touch to the brain. Similarly, microbes have to find their way without sight. How do they sense their surroundings?

Working with Caulobacter crescentus, two independent research groups recently reported the roles of the bacterial appendages pili and flagella in informing the bacteria of surfaces around them. Writing in Science, the researchers describe how disrupting pili or flagellar functions in Caulobacter influences the synthesis of an adhesive, known as holdfast, that is crucial for permanent surface adhesion and biofilm formation.

Based on previous studies, Yves Brun from Indiana University suspected that Caulobacter polar pili played a role in surface sensing. To explore this idea, his team began their study by fluorescently labeling the pili.

“The first striking thing we saw was that the pili, which were thought not to be dynamic, were indeed dynamic; we could see them extending and retracting,” said Brun. This activity stopped immediately when the pili encountered a surface. At the same time, the bacteria synthesized holdfast to anchor itself.

Brun wanted to verify the role of these dynamic pili as “feelers,” suspecting that obstructing retraction triggers surface adhesion. When his team blocked pili retraction using polyethylene glycol, the bacteria synthesized holdfast even in the absence of a substrate, thus confirming his hypothesis.

In parallel, Isabelle Hug and her team at the University of Basel also studied surface sensing in Caulobacter, primarily focusing on the flagella. They noticed that under flow conditions, newly formed Caulobacter offspring remained attached to the surface after cell division. Intrigued about how this happens, Hug’s team tested different Caulobacter flagellar mutants in a microfluidic chamber. Previously, researchers believed that the flagellar filament was crucial for surface sensing. However, Hug’s team showed that disrupting the flagellar filament did not delay holdfast synthesis, but paralyzing the inner motor of the flagella did.

“That’s the coolest thing about the paper. We actually disproved a hypothesis!” said Siddharth Deshpande, second author of the study.

How the motor senses the surface while being embedded inside the membrane is not clear so far, said Hug. The team speculates that proton flux across the inner motor might play a role in the sensing mechanism.

When Brun’s team tested flagellar mutants, however, they observed little effect on holdfast synthesis, implicating the pili but not the flagella in surface sensing; Hug’s team noted the converse. According to Brun, this contradiction may result from differences in their experimental methods. “It’s possible that under no flow, pili are more important, while under flow conditions, flagella are important,” he speculated.

While these studies offer new insights into rapid triggering of holdfast formation, the exact mechanism for sensing physical obstruction still needs to be uncovered. “These are the first steps, and we are both going to have a lot of fun figuring out the rest,” Brun concluded.