Microbes Use Electric Signals to Communicate with Other Species

Microbes use electric signals to communicate with other species

Like human nerves, bacteria in biofilms can communicate using electrical signals. Now, studies show that other species can also tune in to these pulses. 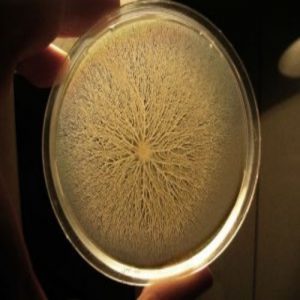 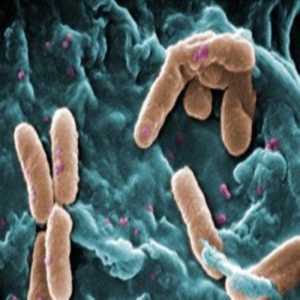 In Gürol Süel’s lab at the University of California, San Diego, researchers watched the world’s tiniest dancers keep time to an electrifying rhythm. Deep within a biofilm of the common soil microbe Bacillus subtilis, a few starving individuals released a flood of potassium ions, sparking an electrical impulse across their membranes. Like a Mexican wave, this signal rippled from cell to cell—across a crowd of a million microbes—until it reached the outer edges of the biofilm, where growing cells paused their progress so nutrients could diffuse inward.

But the wave didn’t end with the film. Süel’s team found that the potassium ions spilled into the film’s surroundings, where motile Pseudomonas aeruginosa bacteria sensed and responded to the ionic pulses. Individuals near the biofilm tumbled in place to remain in its vicinity, while those that were farther away sensed the potassium gradient and were attracted toward the biofilm. When the researchers served up an alternate source of ions, it put a halt to this inter-species chatter. The study’s results, published in Cell, are the first reported instance of electrical signaling between two microbial species (1).

Precisely why B. subtilis and P. aeruginosa—common yet unrelated soil microbes—communicate using electrical signals is still a mystery. Even so, the existence of the signaling is “very striking in itself,” said Süel. “Because they’re evolutionarily very distant, if they can communicate in this manner, one could hypothesize that the mechanism might be very prevalent.”

Whether the cross-talk helps the biofilm or the motile cells remains to be seen. “The biofilm might be trying to recruit cells that are helpful to it, or motile cells are trying to get to places where they can obtain some kind of a benefit,” Süel added.

Süel’s team stumbled across electrical signals in Bacillusbiofilms unexpectedly. While growing the microbes in a microfluidic device, they observed periodic oscillations that rippled across the surface when nutrients were in limited supply. As the film’s surface expanded, interior cells and those at the periphery were in conflict; exterior cells protected the inside, but they also blocked their food supply. Interior cells, however, are vital to the biofilm’s survival, offering protection against antibiotics and other chemicals.

To protect both populations so that the biofilm community could spread while keeping all its cells alive, some sort of long-range communication must exist, the researchers reasoned. They noticed that once the film reached a certain size, it periodically paused its growth for a few hours in response to a glutamate trigger, even when ample nutrients were available (2).

When interior cells were starved of glutamate, they responded by releasing a flood of potassium ions that caused a change in the cells’ membrane potentials. This electric discharge stimulated neighboring cells, setting up a domino effect across the entire film. Once peripheral cells sensed this electric signal, they paused in their growth so nutrients could diffuse through to reach the interior (3).

The work solved the long-standing mystery of why bacteria bear potassium ion channels at all. It also revealed that—much like neurons in animal brains—ionic flow across membranes is responsible for electrical signaling in microbes.

“We were very excited to see this new form of communication in bacteria,” Süel said. “It’s the sort of signaling that was perceived to be exclusive to brains and neurons, but we could show that bacteria could have evolved a very primitive version 2 billion years ago.”

Although ion channels in bacterial membranes were known to exist, their role in communication was unknown. “Before this work, it was just taken for granted that they were not used for any form of long-range communication,” said physicist Jeff Gore of the Massachusetts Institute of Technology in Cambridge. “As a basic discovery, the fact that electrical signaling happens at all is amazing.”

One reason bacterial ion channels were poorly studied in the past was technical, said Gore. To study biofilms, they must be grown in carefully controlled conditions; Süel’s studies, for example, rely on microfluidic devices where bacteria can expand to a large surface area, but the thickness of the film is restricted so cells can be imaged more easily. Unlike mammalian cells, where methods such as patch clamping can be used to observe membrane potential, studying the electrical state of a microbe is also tricky. “Because bacteria are so much smaller, it’s challenging to make similar measurements,” Gore said.

With evidence of electrical signaling and the tools to study them at hand, researchers are poised to probe the functions of these signals both within and across species. Although electrical signaling has only been observed in two soil-dwelling bacteria thus far, the ion channels and proteins responsible are widespread across many species, so electrical signals may be prevalent in other contexts as well. The work opens up an entire field of new questions.

“Historically, we’ve largely studied bacteria in single-species communities,” Gore said. “But that’s rarely the case in nature. It’s important for us to understand what factors facilitate the coexistence of different species.”

Even among the Bacillus-Pseudomonas interactions studied thus far, the purpose of cross-species signaling is a mystery. “Just because something happens does not mean it’s ‘good’ for the signaler or the receiver,” said Gore. “More studies are needed to find out the consequences of this communication on fitness.”

Moreover, natural biofilms exist nearly everywhere: in soil, on the surfaces of machinery, or within the human body. In these environments, biofilms are thicker, can include multiple species, and are exposed to a wide range of nutrients and chemicals. Whether electrical signals are relevant in these environments remains to be seen.

In future studies, researchers will need to validate the existence and relevance of electrical signals in other species and more diverse models of biofilms, both in vitro and in vivo. Such work might reveal whether disrupting electrical communication could offer a new route to combat biofouling or to treat catheter-associated biofilm infections. “There are any number of reasons this could cease to become important in a biofilm infection in a human body,” said microbiologist Kerwyn Huang of Stanford University. “But simply questioning that misses the point of this work. Now that we know cells are capable of electrical signaling, we can begin to ask when, why, and where it’s used.”