While proteins are essential components of life, their roles can vary enormously. It should come as no surprise; they are comprised of 20 amino acids and coded for by different sections of DNA. Their tertiary – or sometimes quaternary – structures rely on the interactions between different amino acids at various points throughout a polypeptide chain and can become increasingly complex.

From antibodies to enzymes to messengers, proteins have been scrutinized by scientists over the years due to their roles in many processes that are key to life. However, there is still much to learn. One surprising protein feature that has just recently come to light is that proteins can conduct electricity under the right conditions.

From ridiculous to proven

“If you had told me that proteins would be good circuit elements 5 years ago, I would have laughed at you – that’s ridiculous,” commented Stuart Lindsay, director of the Biodesign Center for Single-Molecule Biophysics (ASU). 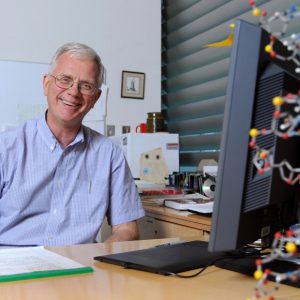 With the finding dramatically overturning their previously-held beliefs, as all progression in science does, the researchers are committed to exploring this new protein feature. Their latest study, published in the Proceedings of the National Academy of Science, has made experimental progress, though they believe they are no closer to understanding why proteins can be good electrical conductors.

“We discovered a few years ago that a protein involved in sticking cells together, with no known electrical function, conducted like a beautiful wire if connected to electrodes by the small piece of protein it had grown to recognize,” explained Lindsay.

“This was a big mystery to us, and the present study was designed to see if this was a general property of any randomly-selected protein. It turns out to be true: all the proteins we have tried, connected to electrodes by means of the specific molecules they recognize, make almost perfect molecular wires, though we are far from understanding why this is.”

The team discovered that proteins must be connected to electrodes through the specific molecules they bind to in order for them to transform into electrical conductors. However, when this is in place, they become perfect components of an electrical circuit.

In respiration, photosynthesis and other key biological processes, the flow of electrons throughout the system is an essential part of the reaction. The complex inner workings of this are difficult to understand due to there being no straightforward methods for analysis. In the novel research by Lindsay’s team, electronic measurements of the single protein molecules were made simply by use of a scanning tunneling microscope.

The first protein the team discovered to be an electrical conductor was integrin, which attaches a cell’s cytoskeleton to the extracellular matrix. Integrin was only a strong electrical conductor when it had evolved to recognize a small peptide molecule. This led the group on a search for other proteins that were also capable of becoming conductors.

Specifically on the search for proteins with no known role in electron transfer, they selected six proteins for the next stage of their study. Again, the proteins were only successful conductors when the electrodes were attached to molecules that the proteins could bind to in their native aqueous environment.

A key discovery made by the team was that conductivity was highest when two specific contact points could be made – for example by use of an antibody with two sites for binding an antigen. A dramatic decrease in conductivity was observed when the antibody was sliced in half.

Where next for the electrical lives of proteins?

The research will not stop here, as this will now allow for new methods for the detection of single molecules with high specificity, as well as building proteins in as components of electrical circuits. This technique will allow for electrical detection of the binding between antibody and antigen through the antigen binding site – the epitope.

In theory, when electrodes are attached to epitopes, individual antibodies should be electrically sensed when present. A benefit of this method is that with no attachment, the reading will be zero, as opposed to the risk of false readings due to background signals in biochemical fluorescence assays.

Lindsay is now working on designing systems utilizing the knowledge that: “One binding site will do, but the best circuits are made with two specific binding sites. Once you’re armed with that knowledge it’s like being told how to use a piece of electronic design software to make protein circuits.”

The team now hope to develop a chip-based version of the technology. This could assist in progressing the field of personalized medicine by connecting to a computer, transforming information gleaned from the novel method into immediately analyzed results. “The next steps will be actually making some of the protein-based machines that will serve very useful functions in medicine and analytical chemistry,” concluded Lindsay. “The technology is very powerful.”

Mutating strains and newly emerging viruses: how can one drug protect against future pandemics?

All quiet on the western blot?