Light-reactive swimming bacteria can be controlled to form different shapes. 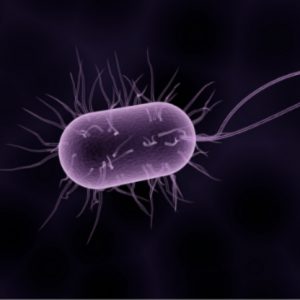 A team of researchers from Rome University (Italy) has engineered Escherichia coli to produce a protein called proteorhodopsin, which allows them to power their propellers using light. As a result, the researchers found they were able to control the swimming speed of the bacteria with light. It is hoped that this could be utilized in building a next generation of microscopic devices.

E. coli can move a distance of ten times their length in a second. The recent discovery of proteorhodopsin in ocean-dwelling bacteria provided the team with the idea to genetically engineer the protein into E. coli and remotely control their swimming speed.

“Much like pedestrians who slow down their walking speed when they encounter a crowd, or cars that are stuck in traffic, swimming bacteria will spend more time in slower regions than in faster ones,” explained lead author Giacomo Frangipane. “We wanted to exploit this phenomenon to see if we could shape the concentration of bacteria using light.”

In order to achieve this, the team projected varying levels of light through a microscope lens onto a layer of bacterial cells for 5 minutes. They then attempted a more complicated light pattern, utilizing a negative image of the Mona Lisa. The researchers discovered that they could manipulate the density of bacteria based on the light projected and after 4 minutes, a bacterial replica of the painting was realized.

The researchers now hope that the ability to control the movement of bacteria will be a valuable tool in the building of microscopic devices as the bacteria could carry objects, such as a machine part, to the location it is needed.

“We have shown how the suspension of swimming bacteria could lead to a new class of light-controllable active materials whose density can be shaped accurately, reversibly and quickly using a low-power light projector,” concluded Roberto Di Leonardo, corresponding author of the study.

“With further engineering, the bacteria could be used to create solid biomechanical structures or novel microdevices for the transport of small biological cargoes inside miniaturized laboratories.”

Are probiotics making you ill?

24 MAY 2017 MICROBIOLOGY AND VIROLOGY