The easy and safe collection of human fecal material is central to the study of the human microbiome. While the precise device used can be one of the most important decisions researchers make during study design, the considerations in device choice can easily be overlooked, often with financial concerns taking precedent. There unfortunately does not exist a collection mechanism that is suitable for the universe of study constraints and the experiments a lab may perform. The decisions about the device, such as the chemicals used, the way the specimen is obtained, and even the types of plastics used can fundamentally bias and limit the molecular procedures that can be applied to the specimen.

The gold standard for many types of molecular procedures is to freeze a sample, ideally at -80C, as soon after collection as possible. While ideal and feasible in a clinical setting, it can be a prohibitive choice for many studies due to availability of freezers, shipping costs or logistics. Imagine, for example, the complexity of carrying liquid nitrogen into the remote villages of Indonesia, or the costs for study participants collecting samples at home and correctly overnighting the samples on dry ice to a lab. As a result, many fecal microbiome studies focus on devices that allow a specimen to remain reasonably stable at room temperature for prolonged periods.

A collection device at a minimum comprises a means to obtain the specimen, and a way to safely contain the specimen for transport. Stabilizing a sample is often performed by including a preservative on the device used to collect the specimen (e.g., a swab), or included as part of the containment for the specimen (e.g., 95% ethanol in a tube). Chemical preservatives may be designed to inhibit specific biochemical processes, or to break open and kill cells, or prevent growth of microbes in the storage. However, financial cost of chemical preservatives can be high. Some devices additionally include small beads, which can provide a physical means to break open cells when shaken vigorously, allowing for ‘in field’ preservation of genomic DNA.

Broadly speaking, sample preservatives can be broken into two major classes: wet and dry. A wet preservative is one in which the fecal biomass is suspended within an aqueous solution. The effect on the cells, nucleic and amino acids, and small molecules is dependent on the exact chemicals used within the buffer. Commercially available reagents, such as RNALater and OMNIgene are designed specifically to fix the RNA or DNA present in a sample through chemical means that halt cellular processes and the biochemical activity of enzymes which degrade nucleic acids. 95% ethanol, on the other hand, disrupts cell walls resulting in the lysis of a large portion of the cells within a sample. While this results in cell death, the stress presented to the cells may alter transcription profiles and potentially bias observations on the expression of genes. A benefit of an aqueous solution is its ability to permeate the matrices within a sample.

Dry collections include the use of cotton-tips or cardboard surfaces that may contain a proprietary reactive powder designed to lyse cells and fix nucleic acids. Generally though, the chemicals used in dry preservation are designed with a particular target in mind, such as halting cell replication. Some studies, such as American Gut, have used dry swabs that do not contain an actual preservative, relying instead on desiccation of the sample to prevent microbial growth; however, when a participant adds too much material to the swab, the moisture present can lead to growth of bacteria in transit, disrupting the signal. Therefore, dry swabs or cardboard without a preservative must be transported to a freezer or snap frozen as quickly as possible, and/or maintained in a low humidity environment.

All of these preservatives (or lack thereof) present different pressures to the microbial cells. These differences manifest in many ways and include, but are not limited to, variation in cell susceptibility to the buffer, and matrix surrounding the cells altering the efficiency of the preservative. Importantly, these variations introduce a technical bias in the resulting data derived from the sample. Furthermore, some of the chemicals used may prohibit subsequent molecular work. For example, high salt preservatives may be incompatible with mass spectrometry instruments thereby blocking the ability to examine small molecules and peptides.

No matter the preservative, a means to physically collect or acquire the sample is an essential consideration. For projects requiring high biomass, such as those using proteomic analysis, a medical commode can be used. These devices sit within a toilet bowl, resemble a plastic tub, and allow for the acquisition of the whole stool. In some instances, commodes are paired with a small scoop and an individual is instructed to gather material from the container into a small vial that perhaps contains a preservative. The procedure may turn some study participants off given the close handling of feces, which is understandably an uncomfortable experience for many.

If biomass requirements are low, as is frequently the case for amplicon and metagenomic studies whereby the downstream procedures require pico- to nanogram amounts of DNA, the devices commonly used are cotton-tipped swabs. The collection procedure is to rub the swab on used toilet paper, discoloring the tip with fecal matter. The device can then be placed back into the tube from which it came, or in some instances broken off into a tube. These tubes may or may not contain a preservative. Like the commode, this can be an uncomfortable experience for the individual. However, used toilet paper collections tend to be preferred by individuals over the scoop methods, which require more intimate interaction.

A further decision researchers face with the preservative is toxicity. It’s not unusual for preservatives to be highly toxic. They are, after all, intended to halt the same type of molecular processes as found in human cells. Caution is certainly warranted to avoid accidental poisoning of humans and animals. While many of the chemical compounds may be toxic, not all are. For instance, 95% ethanol is generally regarded as safe, although it should still of course be kept away from children and pets.

When considering stool collection for a study it is most important to understand that the way the stool is collected, and the method of preservation and transport will influence downstream analysis and findings. Not all devices are the same, and the differences are exhibited in per-unit costs, technical biases when comparing against other studies, experimental limitations, and compatibility with the target population. There exists no single “best” device, and hence consultation with a fecal microbiome expert should be a de facto requirement prior to starting any study. When in doubt, a reasonable strategy is to utilize the device and protocol from the studies in which a comparison is intended as a means to minimize technical differences. And, as is often the case in the sciences and beyond, a reasonable strategy is to err on the side of simplicity. 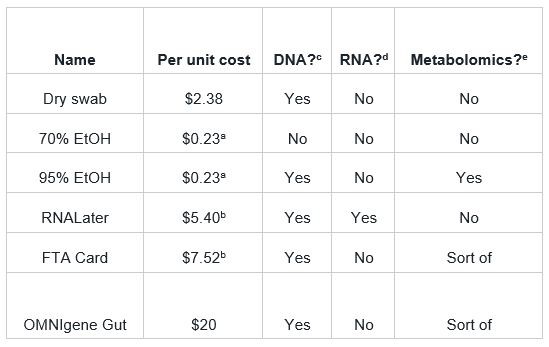